Rumor: Stephen Curry has a "chance" to drafted by the Golden State Warriors

Share All sharing options for: Rumor: Stephen Curry has a "chance" to drafted by the Golden State Warriors

Davidson combo guard Stephen Curry's getting some love across the NBA landscape. Jonathan Givony of the mighty DraftExpress has the 411 after the jump. 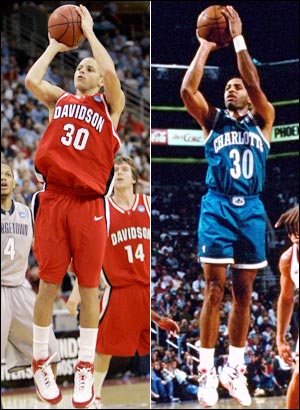 Stephen and Del the Funky Hornet can shoot the lights out.

Larry Brown is reportedly extremely high on Stephen Curry, and may be willing to trade up in order to get him. Apparently he views him as being able to play either guard position, even alongside Charlotte's current group of point guards, Raymond Felton and D.J. Augustin.

Curry is getting love from teams as high up as Washington and also has a chance to be drafted 6th (Minnesota) or 7th (Golden State). While the Knicks clearly like him, he isn't the only player they will consider-the other top candidates on their board currently appear to be Tyreke Evans and Jrue Holiday.

I'm not 100% sure if Curry would be a good fit on the hardwood for this team as they're overloaded with combo guards (Jamal Crawford, Monta Ellis, C.J. Watson) and have a screaming need for a point guard. Maybe Curry can be that guy in the NBA, but way more often than not young players can't make that transition. There's a lot of truth in the mantra that "point guards are born, not made".

Still do you really want to miss out on Bay Area Curry 2.0?