Share All sharing options for: Day 17 of the NBA 2k9 Playoffs

NBA highlights From May 3rd (via NBA)

With the Heat's loss yesterday, Round 1 is over.  It's unfortunate that the last game in that series was a blowout, but the Heat are still young and have plenty of room to grow.  The Beasley-Wade combo will be interesting to watch next year.  For now, The Hawks get to advance to the 2nd round...to face MVP winner LeBron James.  What a reward!

On a quick aside, congratulations to LeBron James.  You deserved the MVP honors this year.  No hate from me today.

Nuggets-Mavericks.  Man, oh man, I was really putting my money Melo and Billups destroying Dirk and crew, but you know what makes me even happier?  Watchin Nene make the Mavs look like fools.  Gwahaha!  SWEEP THEM!

On another quick aside, I found this picture circulating on the internet. 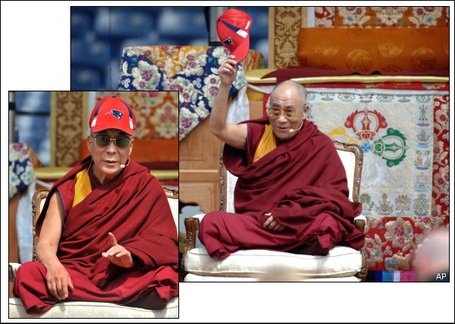 I will say this - the Dalai Lama is a wise man, and he knows about happiness.  In fact, after reading this book, I learned a thing or two about living a complete life.

But then I started thinking, if His Holiness the Dalai Lama supports the Patriots, and he is probaly the happiest man alive, should I start to follow his lead?  Is this the reason, as Warriors fan, I am not completely happy with life?  Am I following the wrong team?  I have much to contemplate on today's journey through life.

On to tonight's games!

Mark my words - Magic in 5 games.  This Boston Celtics team is too weak and too drained from the 7 game multi-overtime series with the Chicago Bulls to put anymore damage into the Eastern Conference.  Without KG or Powe, the Celtics will NOT be able to shut down the likes of Dwight Howard or Rashard Lewis.  In fact, this first game might even be a blowout...

I'm going to go against everyone else - Rockets in 7 games.  I mostly say that because I want Dikembe to have a title, BUT, I believe Artest can shut down Kobe.  Yao can take down Gasol.  The Rockets are on fire, and they can bring it against the Lakers.