Share All sharing options for: Hey, it's not my money...

There's a lot of blame to go around for the sorry state of the Warriors for most of the last decade and a half. Bad coaching, bad drafts and poorly constructed lineups, team chemistry problems and some plain old bad luck. But the constant is the guy who writes the checks (or more likely has some staff underling set up automatic transfers, least he accidentally get ink on his hands), majority controlling owner Chris Cohan. We know Cohan's made some mistakes and we should afford him the same sort of love that anyone who has ruined our hopes and crushed our dreams year after year should get. We deserve better, Chris. A common charge leveled at not just Cohan, but owners in general whenever teams perform poorly is that the aren't spending enough to win, that if they just shelled outmore cash, they could do better. But on this front, I think Cohan's getting a bad rap.

Stacey Brook, Economics Prof. at Nellie's alma mater, U of Iowa has studied the relationship between team pay and winning and finds that it isn't really all that clean. He's got better credentials to look at the $$$ and make conclusions than I do and presents a summary of his case at Hawkonomics (everyone's favorite University of Iowa Economics Professor blog). It's worth a read.

Sure, the Celtics shell out big bucks, but the Knicks have been paying more for less for a while now. And they aren't the only team that's spending like drunken sailors while the losses pile up.

Just for fun, here's a chart I tossed together this chart with team salary vs. wins in 08-09. 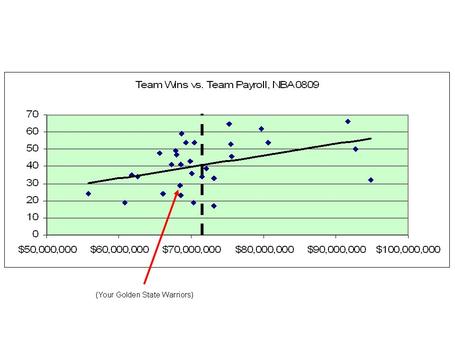 The dotted line is the lux tax threshold. and the solid upward slant is the correlation trend. While there's a loose relationship between what you spend and how much you win, the shotgun splatter of data points should indicate that there are teams that aren't gigantic spenders who still see the postseason and there's some teams leaking money who might be competitive in the NBDL.

And our Warriors are pretty close to the median in spending. They aren't breaking the bank, but there's plenty of teams spending in the same range who are getting more mileage out of their dollar. A lot of teams are right in their range, pushing close to the tax threshold, but not much more. That bunch isn't producing the top contenders, but more there's quite a few of them that saw court time after Nellie took off for Maui. From my vantage, it doesn't look so much like Cohan has been cheap as that he hasn't spent it wisely.

Just a note: Dr. Brook links to a story on NBA salaries in USAToday and their database of team salaries. Their figures include only players still on a team's roster and don't include money still being spend on retired players of contract buyouts. So the USAToday does not include the $6mil that was charged for Foyle's buyout even though that figure counted against both the cap and the luxury tax.