Share All sharing options for: Day 20 of the NBA 2k9 Playoffs

Day 19 of the playoffs got a little bit testy.
Elbows, elbows, more elbows, and a head slap.
These are grown men? 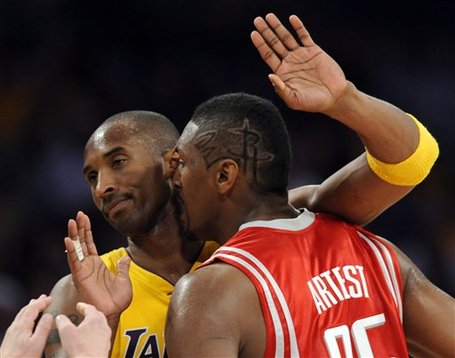 Hey whoa, I'm not into that. Especially not here. 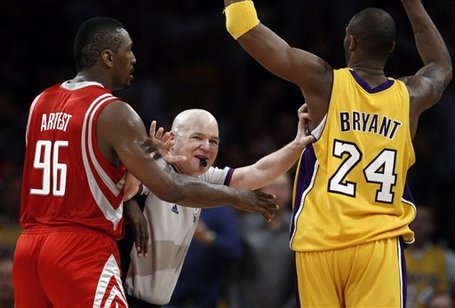 "I'm going to get you..." (Why does it look like Joey Crawford is enjoying this?) 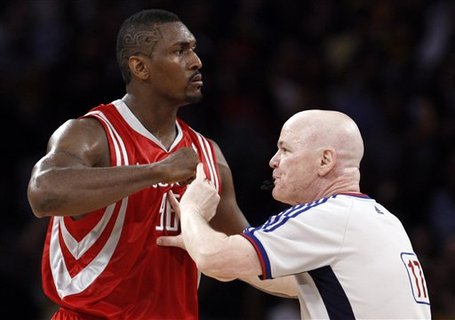 Kobe will be mine... 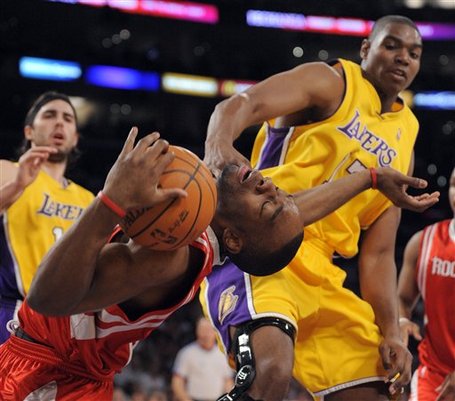 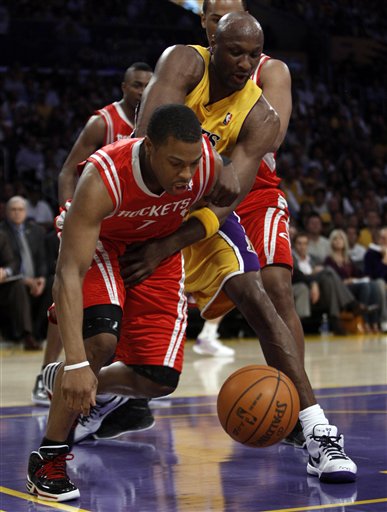 Caption 1: Since Lamar wasn't going to get the orange ball, he decided to go get another.
Caption 2: 2 in the hand is worth...

RECAP: #1 Lakers 111, #5 Rockets 98
This Lakers-Rockets series is turning into the best 2nd round series to watch. Game 2 saw Kobe bounce back big time along with the refs sprinkling in some technical fun. Are the Lakers dirty? In game 2, there were a lot of swinging elbows (here and here), but in the end it was  I don't know but I do know that Joey Crawford shouldn't expect any presents from the Rocket fans. They don't like him very much right now.

As I see it, if this series gets more physical that only benefits the Rockets. I think they love being physical. If Jax was on the Rockets, he'd say he makes love to being physical. Maybe not. Anyways, the Rockets do their best to force you to places you just don't want to be. Even without Dikembe's elbows will put a hurting on you when you step on the court. They like contact. They like boxing out. They like taking charges. They like playing defense. Weird isn't it?

Game 3 in Houston on Friday will be fun to watch.

RECAP: #2 Celtics 114, #3 Magic 99
Boston did what I expected Boston to do. Not give Orlando a chance. Rajon Rondo was THE MAN tonight. 15 points, 11 rebounds, 18 assists! EIGHTEEN ASSISTS! For a guy who doesn't even have a reliable jumper, he's doing some amazing things. Imagine if guys had to actually respect his shot and guard him within 5 feet. The entire playoffs he's stepped it up big time with KG absent. He's just .6 boards shy of averaging a triple double plus nearly 3 steals a game.

The Ewing Theory? Not sure what that is but the Celtics can win without Paul Pierce having a big game. They don't need Pierce!

As far as the Magic are concerned, they did what they needed to do in Boston. Win one game and steal home court advantage. The Game 2 loss hurts because it was a blowout, but I'm sure they'll be back and ready for Game 3 at home. Did Dwight Howard just get outplayed by Kendrick Perkins. By the way, how the heck did Mickael (aka Michael) Pietrus shoot 11-14 from the line. That's nearly 80% in a playoff game. The only thing I remember of Mickael and playoffs are missed free throws.

Rafer Alston must have seen a deadly mosquito on the back of Eddie House's (big big game!) head to do this:

PREVIEW: #4 Hawks @ #1 Cavaliers - 5pm ESPN
Does anyone expect the Hawks to win a game this series? How about 2 games? After the game 1 blowout, Peachtree Hoops has some interesting observations and it looks like the Cavs are picking up where they left off. The only reason to watch game 2 is to watch LeBron. I love watching LeBron. Heck, sometimes I wish I was a Cavs fan so I could watch him play every night. It's amazing how he dominates a game without even looking like he's trying. He's on pace for the most dominating playoff performance ever. Crazy. I won't blame you if you don't watch this one, I don't expect the Hawks to have a chance.