Share All sharing options for: Day 22 of the NBA 2k9 Playoffs

It's another sad day for the NBA.  Ex-coach Chuck Daly, who coached the Dream Team in 1992 and won back-to-back championships with the Detroit Pistons and their "Bad Boys," passed away this morning.  His legacy will never be forgotten in the NBA and basketball as a whole. 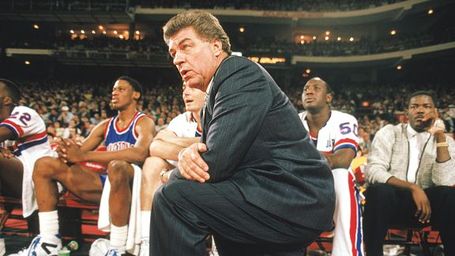 Dwight Howard came back in yesterday's game with 17 points and 14 boards to take down the Celtics, 117-96.  They played short-handed as Rafer Alston was suspended after his altercation in Game 3.  Much props to a team that can with in the playoffs with a starter out.  The Magic are now up 2-1, with Game 4 being played in Orlando...this series might be in the hands of the Magic....

Looks like Kobe decided to stop with the talking, and let his shooting speak for who he is.  I know the majority of us here at GSoM are routing for the Rockets to come out on top, but with Yao being bothered by his foot, the chances are slim.  Check out The Dream Shake and and Silver Screen and Roll for more coverage.

What's this?  Dirk's having a "tough time?"  What does that even mean?  Excuses for losing?  Come on man...don't bring your personal life into your work....BUT, if things are going bad, I do feel bad for you.  Why not just lose so you can attend to those things?  Just sayin...

Whatever, I'm banking on the Nuggets to make the Mavs look like fools on their homecourt.  They gave up Game 3 against the Hornets, but come on, these are the Mavs.  Go Nuggets!!

Easy peezy.  That's how the Cavs are looking at this series.  The Hawks probably stand no chance at all against the LeBrons, and I'm pretty sure they know it too.   Are we looking at a sweep?  Pull out the brooms!  Caaaaaaavvsssss