Tonight might be the biggest game of the series. Either the Magic tie it up at 2-2 or the Lakers take a stranglehold on the series at 3-1. I can't see the Magic being down 3-1 and taking 3 straight games from the Lakers but there's achance that they can win the series if it's tied 2-2. Tonight's game won't disappoint. I dont' think we'll see any more blowouts as in Game 1. The remaining games from here on out will be close throughout.

My new favorite player of the finals after the jump. 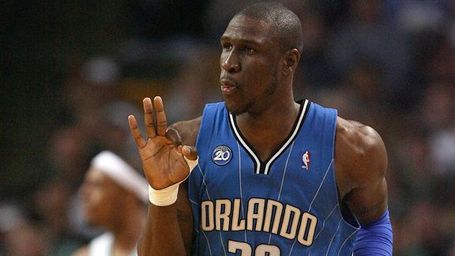 I don't know what it is, but I'm rooting for him to do well. I'll go so far as to saying I wish I had a Pietrus jersey (GSW or ORL) to wear during these games. He just seems like a good guy who's found a niche and is playing well at the right time. In game 3 I was expecting him to miss those 2 crucial free throws down the stretch just like he did in Utah a couple years ago. But nope, swishes both free throws. I haven't seen him step out of bounds on the sideline or make a silly turnover. His body language is different and he's playing with a lot more confidence. I'm glad he's found a role on the Magic.Now if only Adonal could get out there...

Silver Screen and Roll is previewing the game from the Lakers' point of view and the Magic point of view. They have a linkfest going on and are even organizing a watch party to get together with other losers Laker fans.

Meanwhile the good guys aka the Orlando Magic are covered by Third Quarter Collapse who have a linkfest going on as well. The big question, can the Magic keep up their hot shooting from Game 3? Hit up their open thread for a preview.

Here's what worries me about the Magic's chances tonight. They barely won in Game 3 despite an off night from Kobe and the Magic shot the lights out, best shooting performance of any team ever in the Finals. And the game came down to free throws. They should have won by double digits.

They'll have to step up their D tonight and do a better job in the 4th quarter. Last game seemed that the Lakers picked up the pressure on D in the 4th and the Magic offense became a little too helter skelter.

Tonight will be a good one. I'm looking forward to it.

Unfortunately, I'm picking the Lakers by 5. I hope I'm wrong.