NBA Draft days are always fun. It isn't just about the young ballas getting called up from the NCAA and elsewhere in the world; it's also the time when some major names change places. 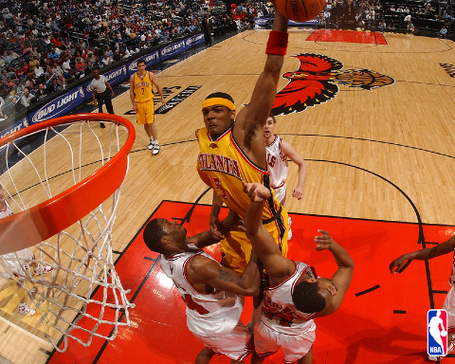 This is guy is wildly entertaining. [via highbridnation.com]

Jump for the details.

ESPN.com's Chad Ford has the scoop in his draft buzz from earlier today:

The big trade rumor flying around (if you're already tired of the Shaq-to-Cleveland talk) centers on the Hawks' Josh Smith. Several league sources told ESPN.com that the Hawks have been working hard the past few weeks to see whether they can find a taker for Smith.

The Hawks have some financial issues coming into the summer. Two key players, Mike Bibby and Marvin Williams, are free agents. So are a few others on the roster -- Josh Childress, Zaza Pachulia and Ronald Murray. Although the Hawks would like to keep those players, they can't afford to pay all of them. That has opened the door to the possibility of trading Smith, who, although talented, has a reputation as a difficult player to coach.

There is one BIG catch of course:

The Hawks have had no problem finding teams interested in Smith. The issue is the whopping $6 million trade kicker attached to his contract. The trade kicker essentially would require the team that trades for Smith to pay him the $6 million immediately. In this economic climate, many owners will balk at the payment.

That translates to 6 million reasons why Chris Cohan will negate any deal for J-Smoove.

Based on my view from the Left Coast and nightly box scores I can't but love Josh Smith's game. This 23 year old has proven that he can drop 17.5 ppg, 8.4 rpg, and 3.4 apg, plus 1.5 steals and about 3 blocks a game. I don't care you how slice it, this guy is quite an intriguing basketball talent. Smith is exactly the type of ball player that Nellie can work wonders with too. I doubt for a second that Nellie would try to run him at the 5 and go super fast. Come to think of it think how much better the Warriors would have been in the We Believe spring if they had Josh Smith instead of Al Harrington at the 5. The shooting at the 5 wouldn't be there, but imagine how many more fast breaks there would be resulting from Smith's thievery and swatage. That's just scary.

But that's just a view from afar. The reviews aren't entirely positive over in Hot-lanta. Our friends over at Peachtree Hoops break it down in State of the Hawks power forward:

Of course, Josh gives us plenty of reasons not to idolize him. No one backs Josh Smith 100 percent. I don't even think Josh Smith likes how Josh Smith plays all the time. That sour puss face is not just reserved for refs...

Blind loyalty and adoration for Josh Smith is dumb. You do not see many players with the attitude of a middle schooler win NBA championships. But like any good enigma, sooner or later, you are going to look foolish if you downplay Smith's skill and importance to the team.

The results of their poll Where do the Hawks need to improve the most? are also very telling.

Still I'd be up for any of trades for Smith involving any combination of Stephen Jackson, Corey Maggette, Kelenna Azubuike, Marco Belinelli, and Brandan Wright. I doubt the Hawks are that dumb though. I wouldn't mind breaking up the defensive disastrous duo that is Monta Ellis and Andris Biedrins for him either. (Blowing up an exciting playoff team to build around two franchise cornerstones who can't defend... your Golden State Warriors).

Post any trade reasonable trade packages you can put together for Josh Smith in the comments.