RUMOR: Jrue Holiday won't work out with Warriors because of agent Dan Fegan

Share All sharing options for: RUMOR: Jrue Holiday won't work out with Warriors because of agent Dan Fegan 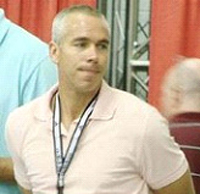 Not a Warriors fan. [via www.danfegan.com]

Power agent Dan Fegan may influence the draft in ways other than trying to steer Ricky Rubio away from Memphis. Fegan and his distaste for the Warriors -- he didn't like how client Al Harrington was treated there, doesn't like the way Don Nelson handles young players, didn't like the way Chris Mullin was fired as personnel boss, and definitely didn't like the sense that being dumped by Stephen Jackson was a condition of Jackson getting an extension -- has reached to Jrue Holiday refusing a workout. The snub is particularly obvious because mid-lottery (the Warriors pick seventh) is a realistic range for Holiday and he is a logical Golden State candidate as a big point guard to play alongside small shooting guard Monta Ellis. But Phoenix at No. 14 got a predraft visit and, barring a change of plans, the Warriors will not. "My agent isn't setting anything up there," Holiday said.

I've been a harsh critic of the Chris Cohan/ Robert Rowell regime way before it was popular to question their every move and decision, but I"m not really sure where Fegan is coming from here. Al Harrington and Don Nelson did have some silly drama and I'm a fan of both, but let's not distort things and make it out to be all Nellie's fault. Harrington straight up quit on this team and his teammates with a "back injury" that magically healed the second he was traded to the New York Knicks. I can't say he really improved his game over his 2 seasons here either.

Don Nelson handles young players just fine- if they're good and working hard (witness Anthony Randolph's amazing work ethic not too long after it was reported that Rob Kurz was beating him out in every way and his thoughts about the earlier battles with Nellie) they'll play. If not, say hello to the pine- which is exactly where they should be. The rookie seasons of Chris Webber, Tim Hardaway, Mitch Richmond, Billy Owens, Josh Howard, and Marquis Daniels should put this nonsense about how Nellie doesn't play young players to rest.

I'm not really sure why folks are still upset at how Mullin was fired here. Plain and simple- overall he didn't do a good job as the Warriors GM. At best he was just a nice guy who was way in over his head. His professionalism is handling Moped Gate is really questionable. If it was so bad this past season, he easily could have resigned from his duties. But he didn't. He collected paychecks and according to players and other sources didn't show up to work that often. The major point here is that why should Jrue Holiday or any other potential 2009 draftee care about this past situation? If their agent is going to cost them hundreds of thousands because of this, it's probably time for them to find a new agent who isn't putting his personal vendettas before the well-being of his clients.

I find it hilarious how Stephen Jackson had to dump Fegan to get that extension. Fegan's former client did just fine (better than he should have) without his power broker. Jack ditched Fegan and has seen plenty of greener pastures. If anything I think this is what's driving the manipulation of Holiday by Fegan. Jack and the Warriors undermined his power and image as a power broker. Jackson didn't need Fegan one bit.

There's a lot of distaste in the media and amongst fans for agents, but I usually don't share those sentiments. Agents are the ones who are looking out for their clients, the individuals who make the NBA and other sports leagues interesting. In this particular case with Holiday however, I really question if Fegan is looking out for the best interests of his client.