The onslaught of rumors, speculation, and pure silliness continues here at the mighty GSoM. The hottest rumor in the land right now is between two Western Conference squads, the Phoenix Suns [Bright Side of the Sun] and Minnesota Timberwolves [Canius Hoopus]. Some folks are calling BS [KSTAR], but isn't that what 99% NBA rumors are? (Seriously get with the program and stop being such a party pooper!) 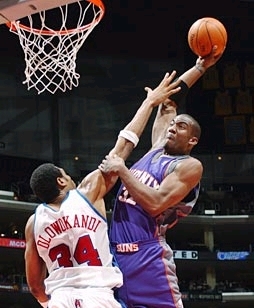 Everyone in the entire association should be trying to get this guy.

(Amare, not the Kandi man in case you were confused.)

Just for the details and some guaranteed craziness.

From The Boston Globe:

An NBA executive told the Boston Globe today that the Minnesota Timberwolves is working a deal with the Phoenix Suns that would send former Celtics forward Al Jefferson and their sixth pick in next week's NBA Draft for All-Star Amare Stoudemire.

I honestly don't understand why the Suns are in such a hurry to ship out Amare or break up their core. I see no reason why they shouldn't make one more go at it with Steve Nash, Shaquille O'Neal, Amare Stoudemire, Jason Richardson, Grant Hill, and Matt Barnes. They're coming off a good season (46 wins) in which they essentially lost their best player for half a season to a fluke injury. Why break that up so hastily? But look on the Bright Side (of the Sun):

As for the Timberwolves- congratulations for finally ditching Kevin McHale about 10 years too late. The Warriors may have wasted one 1st round pick on Joe Smith, but McHale's TWolves wasted 3 picks. From our dogs at Canis Hoopus:

I don't doubt for a second that Amare will be bolting Minny the first chance he gets if they ended up making this trade. Amare's a far superior player than Al Jefferson in terms of athleticism and talent (maybe not numbers) and I can see where they're coming from. However, it seems like Jefferson actually wants to be there and is in it for the long haul. I'd stick with Big Al if I were them, though it would be impressive if they pulled this off.

And what about the Dubs? It's quite simple. They should be willing to move anyone and everyone on the current roster for Amare. Any combination will do. Moped Ellis and Troy Murphy without a jumpshot? Done deal. Don't think for a second that Amare wouldn't be a fantastic fit at the 4 and possibly 5 for Nellieball and instantly make this team much more formidable. My dream summer scenario: deal (something like) Monta Ellis, Andris Biedrins, Marco Belinelli to the Suns for Amare Stoudemire and Jason Richardson. Then deal (something like) Corey Maggette and Brandan Wright to the Clippers for Baron Davis.

Do you really think Nellie can't work some magic with that crew? Tell me you're not foaming at the mouth thinking of what kind of havoc that team could impose on the league. Sure it's super risky, but at this point the Warriors have absolutely nothing to lose.

(Yes, I have quite the imagination.)

Data for this widget is not currently available

Thanks to loyal GSoMer Sleepy Freud for posting up this rumor in the FanShots and giving me a launchpad for all this craziness.