RUMORS: Warriors building around Monta Ellis, "deeply involved in trade talks" for #7 pick, and Larry Riley would like a "little beef"

Share All sharing options for: RUMORS: Warriors building around Monta Ellis, "deeply involved in trade talks" for #7 pick, and Larry Riley would like a "little beef"

Part II of the RUMOR: Warriors promised Monta Ellis they will not draft a play-making guard to appease him in links and quotes plus much more after the jump! 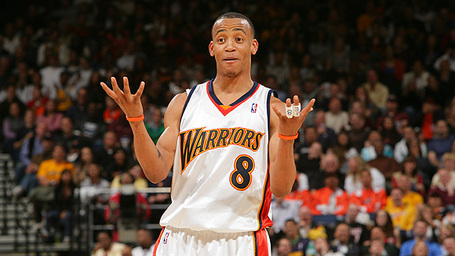 Even when he's not playing he and his camp make a lot of noise. [via lowposts.com]

"The GM and the coach traveled to Memphis to further provide that assurance to Monta that this is his team and they're looking to build this team around him for years to come," Fried said in a phone interview Friday. "Monta's response to them was that the most important component is winning. He wants to win and he wants to win with the Warriors."

Golden State has the seventh pick in next Thursday's draft and is deeply involved in trade talks involving the pick. But those talks, evidently, will not involve Ellis.

Building the team around an undersized shooting guard with limited handles, court vision, defensive desire, maturity, hoops IQ, and overall smarts... is not a bright idea. Don Nelson and Larry Riley are smarter than that. I'm calling their bluff or Fried's distortion of what was actually said. I believe Monta's being tossed around in trade proposals as he should be. If he can be part of a trade for Amare Stoudemire or Chris Bosh this offseason will have been a huge success.

This is the first I've heard of the Warriors actively trying to trade the #7 pick as part of a larger trade package. Very interesting indeed. The hype around a draft is usually off the charts right before draft day and soon after. It would be great to capitalize on.

Over at Fanhouse Matt Steinmetz also chimes in with Monta Ellis Wants to Retire a Warrior:

Ellis said in an interview with KNBR that general manager Larry Riley and coach Don Nelson had flown east to meet him and that the get-together "really put us on the same page."

The obvious question from this is of course is- so you guys weren't on the same page before this get-together? Why?

ESPN's Chad Ford talks to GM Larry Riley in his latest Draft Buzz on ESPN adds to the discussion:

Riley said that he and head coach Don Nelson have been meeting with every player on the team, debriefing what went down last season, and trying to get the entire team on the same page. He said they weren't meeting with Ellis because he was disgruntled or demanding a trade. It was in the course of interviews with everyone on the team...

"We did not make him a promise on who we're going to draft," Riley said. "There was none of that. There was no talk about not drafting particular positions or particular players. Our talk was totally about our team and our staff and getting things moving in the right direction. We were trying to get everyone on the same page."

So would the Warriors balk at drafting a point guard at No. 7? "If the right guy was there at the point, we'd draft him," Riley said. But when I asked Riley what his preference would be, he said, "I'd like to have a little beef. We can always use more size and toughness. We don't really have a gaping hole at any position, so I think we'll draft the best player available. If it's a point guard, then it will be a point guard. If it's a 4, then that's who we'll take."

Larry Riley really seems to be a fan of this campaign: 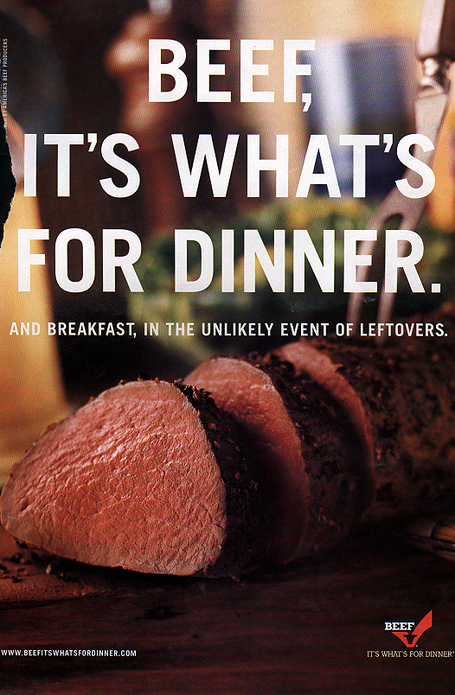 Maybe Brandan Wright should start eating the beef if he wants to stay with the Dubs?

Tim Kawakami from the Mercury adds Monta Ellis speaks: Sounds like he expects to be (surprise) the Warriors’ point guard:

But was Ellis asked whether he'd been told that the Warriors wouldn't take a play-making guard? Was he even asked about the draft/don't-draft a PG issue? No and no. Hmm, interesting.

Aren't you glad there's no conflict of interest when a Warriors employee is doing the interviewing on their flagship radio station? Even Larry King gives tougher interviews.