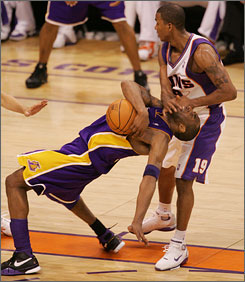 Well the Dubs do play the Fakers 4x a year. [via images.usatoday.com]

Jump for the details of this rumor.

From Jonathan Givony of DraftExpress in Word on the Street, June 22nd:

Golden State appears to be exploring possibilities to improve on the defensive end in hopes of making a strong run to the playoffs next season. One trade that has reportedly been offered by the Charlotte Bobcats that may help on that front would involve packaging Kelenna Azubuike and Marco Belinelli in exchange for Raja Bell. The Warriors are pondering the offer, but would have to get Azubuike's consent to make the trade unless they decided to wait until July 24th.

First of all it's good to hear the Warriors are exploring possibilities to improve on D. They can start by trying. The next step is getting players who can and want to actually play defense. Kaz is not a great defender by any stretch mostly because of his sub-par foot speed for an NBA swingman, but he's not the worst defender on this team. Nor is he a player that needs to be shipped out. Although he exerted infinitely more effort on defense this season than his first in the association, Belinelli still looked clueless on defensive end last season often making silly mistakes resulting from not even paying attention to his man.

There's no doubt that the Warriors need to upgrade their roster defensively. Azubuike is by no means untradeable and Belinelli really isn't worth holding onto barring some miraculous and stunning improvement by him next season (good for him if he pulls it off, but I just don't see it). Even though he's had some flopping moments, Raja Bell is a very reputable defender. His 3pt shooting is also very impressive. Think Mickael Pietrus with a much higher hoops IQ.

BUT this trade as is seems a little odd. Is an aging Bell (33 at the start of the season) with his solid defense really that much better than Azubuike at this point? If the Warriors were anywhere close to contending (which they aren't for anyone wondering), then I might be persuaded to see the potential benefits of this trade with Bell's defense. As is however, I'm not so sure this buys the Dubs all that much if anything at all.

Still it's great to see some defensive vibes coming out of the Dubs after their absolutely atrocious defensive performance this past season.