Here's the second installment in our interview with NBADraft.net's Aran Smith. Head on over to the first part for some broader thoughts on the 2009 NBA Draft. 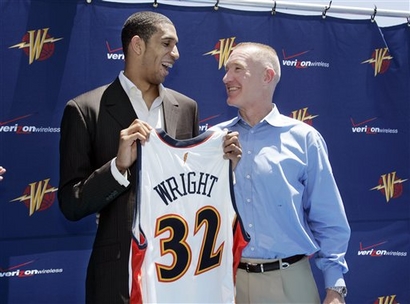 Will they both be gone?

In this segment we look at whether Tyler Hansbrough will fare better than Brandan Wright in the NBA when it's all said and done. We also look at Marco Belinelli's NBA career thus far and the Jason Richardson - Brandan Wright swap almost 2 years after we first touched based with Aran.

Atma Brother #1 (Golden State of Mind): I keep telling my friends that when it's all said and done Tyler Hansbrough will have a better NBA career than his former UNC teammate and current Golden State Warrior Brandan Wright because he actually has a motor. My friends keep telling me I'm crazy for saying that. Who's talking that crazy talk?

Aran Smith (NBADraft.net): Hmm. At this point that's a pretty good argument. Hansbrough is going to be solid. He doesn't have Wright's potential, but we know he'll be pretty solid. Wright still has a ways to go before we can say that. Long term, the answer to that actually may come down to situation and opportunity.

Atma Brother #1 (Golden State of Mind): When we mic'ed you up almost 2 years ago you seemed pretty high on Marco Belinelli, calling him a "special talent" and saying the Warriors "got an absolute steal" in the 2007 draft. [See Q&A: Aran Smith of NBADraft.net on Marco Belinelli] After seeing him play for two seasons in the NBA, how high are you on him now as an NBA player? What do you project for his NBA career?

Aran Smith (NBADraft.net): I still like Belinelli. But it's probably time to temper the expectations for his career. He has not been able to get the playing time necessary to develop. Maybe he needs a change of scenery because it just doesn't appear Nellie believes in him. With guys like Az and Morrow in front of him now, it's hard to know if they'll have much use for him.

Atma Brother #1 (Golden State of Mind): You seemed reasonably high on Brandan Wright early in his rookie season and said you love the Jason Richardson trade that brought him here. How high are you on Wright now and his NBA future? Do you still like that trade? [See Q&A: Aran Smith of NBADraft.net on Brandan Wright]

Aran Smith (NBADraft.net): I still like Wright a lot. And I was frustrated with how often he would start out of the gates hot, only to have Nellie bench him for much of second half. Give this guy a chance! Lets see what he can do. The Warriors obviously could have used JRich in the 2007-08 season and would have made the playoffs, however moving forward you would rather stay young. He obviously has some work to do on his body and game, but I anticipate we'll see him make a big step forward this season.

Keep it locked on GSoM for part 3 where we talk Dubs and 2009 NBA Draft.