Share All sharing options for: Warriors (seem like they're) down to Arizona PF Jordan Hill and Davidson PG/SG Stephen Curry

The pre-draft mania continued yesterday with Larry Riley and Don Nelson's media session. Nellie has quite the intriguing draft record, so you've got to be naturally excited about Draft Day 2009. Chris Mullin won't be getting in their way with his seemingly endless affection for raw, skinny big man (ahem Patrick O'Bryant, Kosta Perovic, Brandan Wright, and Anthony Randolph). Riley has said he'd like some beef as well. So what does this all mean? Quite possibly Arizona power forward Jordan "Shake 'Dem Dreads" Hill. 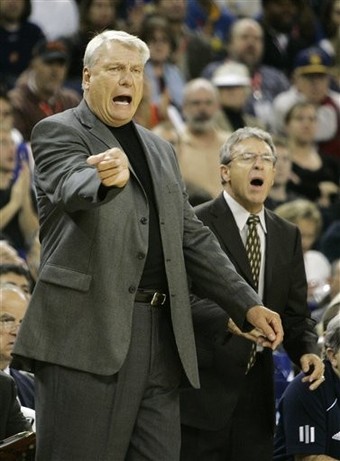 Riley and Nellie talk to the media. [via cache.daylife.com]

Marcus Thompson's got the info:

Riley, in a session with the local media Monday, said the Warriors are likely to draft either a point guard or a power forward, with the discussion centering mostly on Davidson guard Stephen Curry and Arizona big man Jordan Hill. A selection at either position would create interesting roster decisions this offseason and, if a point guard is drafted, perhaps the need for some smoothing over with guard Monta Ellis.

Who would've thought that in a draft supposedly loaded with point guards and weak in power forwards aside from the Clips new big man, the Warriors would be seemingly fixated on a power forward? BPA always though, but again I ask: Is Hill the best player available? Better than my fav and your fav Brandon Jennings?

Part of me thinks the Riley and Nellie are just messing with the New York Knicks front office and trying to make them sweat with all the Curry vibes. Donnie Walsh and Mike D'Antoni seem to be enamored with Curry and he's also friends with a certain Muppet, which is critical for the summer of 2010. I wouldn't mind some Curry Nights at the Roaracle next season though. Even though they're already "Partying Like It's 2010" our friends over at Posting and Toasting can you tell you all you'd ever want to know about the enigma that is the NYK.

We shall see soon enough...

Draft Central over at Warriors.com has a Tim Roye interview clip with Riley that's worth checking out too.
Also don't sleep on the ongoing Ball Don't Lie 2009 NBA Mock Draft. You should recognize the pick and words: BDL 2009 NBA Mock Draft: Pick No. 7, Warriors