Don't forget to check out Part 1 and Part 2 of this trilogy with Aran Smith from NBADraft.net. 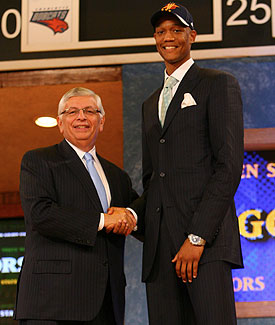 How high would AR go in this draft? [via www.nba.com]

We get right down to business in this part. Do the same by J-U-M-P-ing!

Atma Brother #1 (Golden State of Mind): Anthony Randolph is coming off a very intriguing rookie season with the Warriors. How does he stack up against this draft class? Where would you project him to go in this draft?

Aran Smith (NBADraft.net): If the Randolph that played this year for the Warriors somehow was thrown back into the draft, he'd be the #2 pick. I think Randolph has a lot of upside and really liked that pick since he was the player with the most upside of anyone at 14. No sense in taking safe picks when you can pick up those types of players in free agency.

Atma Brother #1 (Golden State of Mind): With names like Ricky Rubio, Brandon Jennings, Stephen Curry, Jonny Flynn, Tyreke Evans, Ty Lawson, Jeff Teague, Patrick Mills, and Jrue Holiday this draft seems like it has plenty of point guard options to help the Warriors shore up their biggest glaring weakness. Is there a big difference between them in terms of talent and upside? Do you see any All-Star appearances out of this group?

Aran Smith (NBADraft.net): There likely will be a few all star appearances from one or two of these guys. As far as difference in talent, yes there are a few tiers. Rubio and Jennings have the most upside. Flynn is a guy who combines solid potential with current ability. Teague might actually have even more upside than Flynn, but he's got a ways to go. Evans is not a true point guard in my book, and I'm also not sure why people haven't caught onto the fact that the big point guard is a failed experiment. The rest of those guys are late first round types.

Atma Brother #1 (Golden State of Mind): With the 7th pick in the 2009 NBA Draft the Golden State Warriors SHOULD select... Why?

Aran Smith (NBADraft.net): The Warriors should take the best player available. I would take Jennings if he's there. He makes the most sense long term for them and goes along with the swing for the fences approach that brought them Randolph last year. DeRozan has a lot of upside and would make for an interesting pick. I also like Hill, but if they take him, we may never find out how good Wright is until he gets a fresh start with a new
team.

Atma Brother #1 (Golden State of Mind): With the 7th pick in the 2009 NBA Draft the Golden State Warriors WILL select... Why?

Aran Smith (NBADraft.net): Nellie wants to win now so I anticipate they will go with the most NBA ready PG at their pick: Jonny Flynn. Flynn isn't a bad pick, but there will be other guys available with more upside. That would mean taking a risk and rolling the dice on a player for the future, so that may not be in the cards.

All of us at GSoM wanted to thank Aran for taking the time to field these questions. NBADraft.net has long remained one of my favorite hoops destinations. It's ridiculously easy to lose hours on the site just flipping back through the draft archives (which is exactly what I did when I wrote this piece: Golden State Warriors 1st Round Draft History and Just My Imagination) and reading up about players that won't even be drafted till 2010!