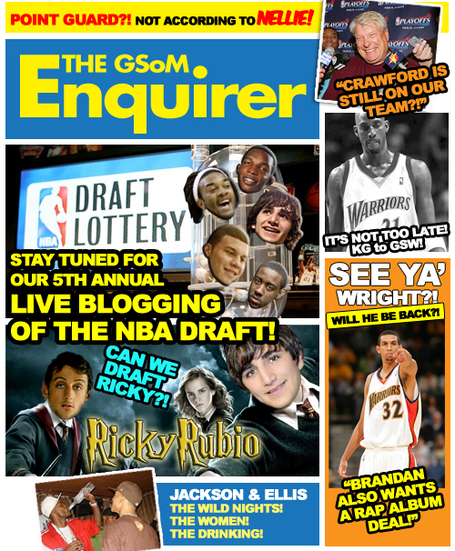 Mad props to Tony.PSD for another dope creation!

It's as big as the Warriors first game this upcoming season...

It's as big as the Warriors finishing 10th in the Western Conference....

It's almost as big as the Warriors 08 draft pick Anthony Randolph...

Check us out at 4PM where we'll begin coverage of the first and second round.  We'll drop a quick analysis of the first 7 picks (up to the Warriors) as well as draft day rumors and news.

If you aren't next to a TV catching ESPN (and even if you are), join GSoM online to read our breakdown of the latest picks, draft rumors, blunders, and some inside tips as to how to keep a clean home.  Keep clicking that "refresh" button and good things will happen!

Stay tuned the next 24 hours for more rumors, news, and of course, THE DRAFT!

Yes, things are quite shaken up after the unofficial announcement of the Jamal Crawford trade...think we're still going after a PG?  Or was that trade just made for salary implications?

Who's it going to be?  Brandon Jennings perhaps?  Think Hill is all but locked up?  Stephen Curry?  Michael Jordan's son? JAMES JOHNSON?!?! (who?)

Don't forget to drop your votes on Who you THINK the Warriors Will Draft and Who you WANT the Warriors to Draft!