It has been quite the interesting day at GSoM. The Dubs and Hawks look to be making a Jamal Crawford for Speedy Claxton and Acie Law trade (read: salary dump and save Cohan cash). And of course there's the famous GSoM annual draft polls: 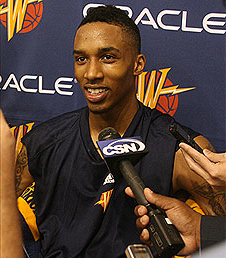 Let's talk about Brandon Jennings baby!
Over the course of the preceeding weeks of 2009 NBA Draft mania the people's choice here at GSoM has consistenly been Jennings (see words on Ridiculous Upside + syndication on Ball Don't Lie). As of right now it looks like GSoMers are warming up on Stephen Curry, but Jennings is still leading the fan vote. We haven't heard many vibes from the Warriors that they're going after Jennings, but after the jump we've got some reported Dubs love for him via Chris Broussard on ESPN.com.

Chris Broussard over at ESPN.com has the info:

Brandon Jennings, who may drop out of the lottery, had a tremendous workout with New Jersey on Tuesday. Coach Lawrence Frank felt he ran the pick-and-roll better than any player the Nets worked out.

The Nets believe that in three to four years, Jennings could be either the first- or second-best player in the entire draft class. But they believe he's two to three years away from being an everyday starter, so they won't pick him.

Golden State likes Jennings at No. 7, but coach Don Nelson told Jennings he'd be a backup to Monta Ellis. Nelson's going to move Stephen Jackson to 2-guard. Jennings is hoping to go somewhere and play right away. Milwaukee's a strong possibility at No. 10. If he falls, Phoenix could nab him at No. 14 or Philadelphia at No. 15.

As much as I dig his game given his build and lack of a NBA quality J, I really don't expect Jennings to be starting many games and playing big minutes his rookie season. Backing up Moped at the 1 could be interesting though. The Warriors get to see if Ellis can handle running the point (most of us already know he can't already, but to satisfy people's curiosity in another upcoming losing season- why not?) and Jennings can be brought in slowly as the point guard of the future. I'm game.