How under the GSoM radar has JJ flown? Well he's not even on either of our draft polls: 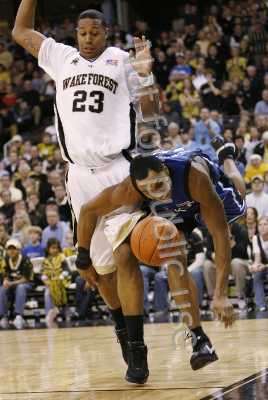 Maybe he can play for the San Jose Earthquakes too! [via www.nancarrow-webdesk.com]

If you're feeling Johnson for either poll, please drop a comment in those respective threads. Jump for the details!

With a proposed Hawks-Warriors deal inching toward completion, it's time to take a second to analyze how this affects the draft.

The Warriors have the seventh pick in the draft and have been strongly considering both Curry and Jordan Hill. This deal gives them a young point guard in Acie Law, which makes one think the Warriors will go big at No. 7. If Hill is off the board, they also like Wake Forest's James Johnson.

James Johnson is a 22 year old 6'7-6'8 257 pound forward. Riley has said he wants some more "beef" on the Dubs and JJ would definitely advance them towards that goal. I'd definitely be shocked if they took him though. We will find out within 24 hours...