RUMOR: Warriors and Raptors had a Marco Belinelli - Joey Graham deal in place

Share All sharing options for: RUMOR: Warriors and Raptors had a Marco Belinelli - Joey Graham deal in place 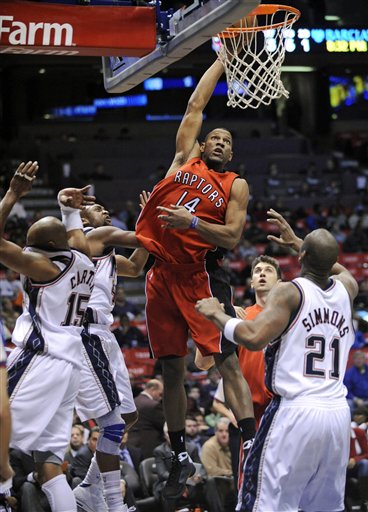 Joey Graham does the unthinkable and makes Vince Carter look like Mike Dunleavy. [via photos.nj.com]

Jump for some details on the swap courtesy of our northern neighbors.

From the Toronto Star:

The things you learn schmoozing with people around something like an NBA final.

From the Water Under A Bridge department, found out last night the Raptors had a deal done with Golden State last season that would have seen them ship Joey Graham to California for guard Marco Belinelli.

It was so done that Bellinelli was almost on his way to the airport to come to Toronto and told friends he was being traded.

And then the Warriors backed off and killed the deal.

I still don't buy that Belinelli belongs in this league, but it's not a given that Graham gets a second NBA contract either. Neither player is even an average quality NBA player or has a high hoops IQ, but at least the athletic Graham gives the Warriors a little more size and cuts down their glut of poor to mediocre ranging guards. Truth be told, the Warriors aren't going to get much at all for Belinelli straight up. Unless the Warriors are taking back a bad contract, I'd be suprised if Belinelli could even net them a future 2nd round pick straight up.

This isn't a huge deal and I'd doubt it would have changed much about that horrendous WE SUCK 29 win season, but if this is true I'm curious why the Warriors killed off the deal.

Since we're in draft season, it's always fun to take a look back. The Warriors were heavily linked to Graham in the 2005 NBA Draft (the Ike Diogu 1st round bust one).