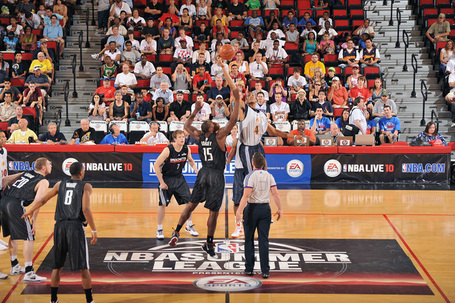 The (meaningless) LVSL has tipped off!

Photo by Garrett W. Ellwood/NBAE via Getty Images via d.yimg.com

Make the jump for some video highlights, linkage, and more!

GSoMer eschalon dropped the finest Warriors Game #1 LVSL coverage across the Dubs land in LV Summer League - Day 1 - First Impressions (eshalon). Definitely check out the entire piece and use it as a examplar of what makes a great FanPost on GSoM.

I think like a lot of people here, I was highly optimistic of the 2009 summer league GSW team.  A bigger, stronger Anthony Randolph?!  Improved Anthony Morrow?!  New man crush Stephen Curry?!  Highly touted Aussie Joe Ingles?! Sadly, the GSW's started off the Las Vegas summer league like the regular season GSW's ended it.  Getting outrebounded by a LARGE margin (45 to 29), shooting terribly (37% from the field as a team), and falling apart down the stretch to lose to the Houston Rockets summer league team 73 - 69.

Anthony Randolph showed off his all-around talent in this one, scoring 20 points on 17 shots, grabbing 10 rebounds and picking up three assists and two steals, though he also had nine fouls and three turnovers.  We all knew Stephen Curry was going to shoot, and he did, throwing up eight three-pointers and 14 shots overall, though he only made four of them.

"He did OK," Smart said. "He's such a team player that he gives it up and then tries to get it back, which is natural for him. We want him to be more aggressive personality-wise -- get the ball in his hands and make plays. ... We have a couple of guys on our team who have strong personalities and he's going to need to be the one making the plays."

One game in, Golden State's Curry already has the look of a pro [Las Vegas Sun]

"I like everything about him," said Nelson, kicking back in a T-shirt and baseball cap. "There isn't anything I don't like about him. He's gonna be a very fine player, I think. "He'll always be a good offensive player. When that opportunity presents itself, he'll do fine. It's just until he feels comfortable playing the game and being out there early as a young rookie. We can ride with the mistakes that he'll make and he'll become a well-developed player."

Ronny Turiaf was in the house at Cox Pavilion "seeing his boys" as he put it. His boys: Austin Daye and Anthony Randolph. Turiaf and Daye both went to Gonzaga, and Randolph is a teammate of Turiaf's at Golden State ...

Summer League: Day 1 [Inside the Warriors]

Something interesting: the uniforms had an advertisement for NBA Live ‘10 on the upper right. These uniforms are really practice uniforms, reverseable mesh. But that is how money has impacted things. Don’t be surprised if a team sells space on their real uniform. It’s already being done in the WNBA (Phoenix and LA). I can definitely see a Symantec or Kaiser logo on a jersey.

Uhhh... let's hope the NBA doesn't ever have to go that route. Can you say TACKY?

A couple things I heard tonight: 1) Warriors not interested in Carlos Boozer; 2) Warriors will NOT sign a big-time player who won’t re-sign - especially if it involved giving up Andris

I love the mind games the Dubs are trying to play with the Phoenix Suns and Utah Jazz, but can we please just pull the trigger on one of these trades before the season starts? Preferably for Amare? The last thing I want to see is a whole season of this current poorly constructed Dubs roster play entire season only to win 36-40 games and miss the playoffs for the 15th time in 16 seasons.

Seems like the Dubs are just posing about #1 and #2 just like R.R. about the Warriors penning sale. R.R. sounds like a man who knows the only NBA owner dumb enough to give him a front office job with his lack of qualifications is also going for the double-double with his initials- C.C.