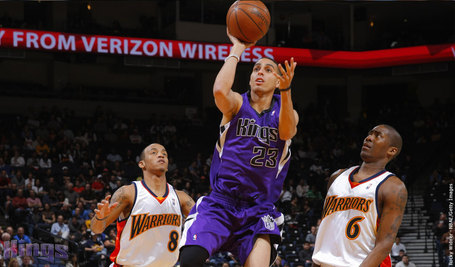 Defense is typically not a strong point when these two teams square off. [via pix.kingsconnect.com]

The thing that bugs me the most about the LVSL video coverage is that it's only available online for $15. I understand why they charge for the streaming and on demand online access. But what makes zero sense to me is that the games are neither broadcast live nor on tape-delay on the league's mothership TV station NBATV. What's the point in forking over the extra few bucks every month to our cable operators for this station if they aren't even going to provide these games?

Oh well, moving on... now's a good time to get used to the losing NorCal! JUMP.

My main man Ziller gives you everything you could ever want to know and much more about this late afternoon's opponent, the Sacramento Kings:

The matchup that's caught my eye today is Anthony Randolph vs. Jason Thompson. I think both have an incredibly bright future in this league. See Polling GSoM: Which rookie forward will have the better sophomore campaign? for a really provocative dicussion about AR vs. JT.

Please make it a point to head on over to Sactown Royalty at some point this weekend.

Ziller and crew have been doing exceptional work over there for years (pre-GSoM actually), but SR rarely actually gets read by Kings fans.

Are you seriously asking me that or are you joking around? I mean they just got access to running water and plumbing up in Sacrapmento. Do you really have to rub it in their faces that they're years away from the finer things in life such as broadband and WiFi? Come on now, don't be mean.

I kid. I kid. Bay Area and Sacramento (plus the 2 Clippers fans out there) must band together in solidarity against the evil force that is... the LA Lakers.

Another one of our allies.

By the way after I heard about Ron Artest in Purple and Gold [Silver Screen and Roll] the first thing that came to my mind- and I won't lie- was- "Man, I can't wait till Artest goes nuts again and runs up into the Staples stands to beat up some punk Faker fans!"

Okay while I did think that and I did think it was quite funny, I seriously don't want anyone to get to beat up... even if they're annoying Laker fans with ZERO knowledge of hoops.