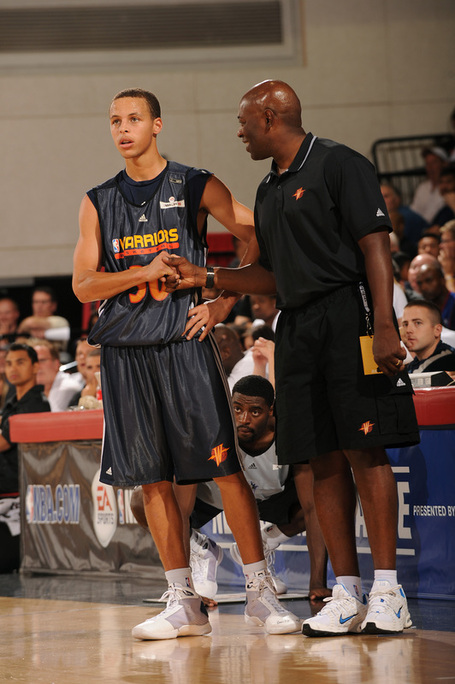 Stephen is a Smart man.

(Photo by Garrett W. Ellwood/NBAE via Getty Images) via d.yimg.com

Mass linkage and video interviews ensue after the jump!

After a dismal first half (0 for 8 shooting and 2 pts), in which he tweaked his ankle, Steph exploded in the second half / OT for 27 pts. He continues to impress me with his ball handling and decision making. He did drill three 3's in the second half, but surprisingly, he did the majority of his damage on drives to the hoop, resulting in either a layup or a trip to the line (sometimes both.) He utilized his quickness and ball handling to blow by defenders at will and was able to finish numerous times amongst the trees. He spent more time driving to the hoop in the second half than Jamal Crawford did all season long...

The most impressive thing to me is his BBIQ. His 3 assists weren't indicative of some of the great passes he made, particularly running the pick and roll...

The way he plays reminds me of a really good poker player. In poker you want to get your money in good when you have the best hand, what happens after that is up to how the cards fall. You judge yourself based on the decisions you make, rather than the results, because you can always make the right decision (taking the open shot / making the correct pass -> getting your money in with the best hand) and get the wrong result (missing the shot / not converting the good pass -> getting sucked out on.) Judging him based on his decision making (something the Warriors are sorely lacking in), I think he did a stellar job today, and he's quickly turning me into a Curry fanboy.

An overtime game! In Summer League! Feel the excitement!

"He's been just average, but what he has shown is the understanding of the game that we thought he had," Riley said. "I think he'll just keep getting better each game that he's here. He's going to play as a rookie, and his learning curve will tell us when that will be."

Agents believe the Warriors are playing a waiting game, thinking -- with the reduced salary cap -- teams will be out of cap room before leftover free agents can be grabbed at a discounted rate. Warriors GM Larry Riley said the team is still after a power forward who can play center or a center who can play power forward. "We're looking at a number of guys, but we want to be cautious in how we spend our money," he said. "We're going to proceed cautiously."

The same names (Drew Gooden, Sean May, Joe Smith and Chris Wilcox) continue to be the obvious choices.

Enter Jason Thompson and Donté Greene. The second-year forward and small forward, respectively, would be the ones leading the team during practices and five games, showing the newest youngsters how it should be done and producing like the relative veterans they are. That's the theory, anyway. But as the Kings blew a 14-point, fourth-quarter lead and fell 98-95 to Golden State in overtime at UNLV's Cox Pavilion, the duo hardly dominated for the second consecutive game.

I think we all know who won that battle between the NorCal forwards yesterday:

AR > JT in year 2. I do like them both though. See Polling GSoM: Which rookie forward will have the better sophomore campaign?

I wonder if the Warriors can swing a Brandan Wright for JT trade? Okay, I'll stop dreaming.

It's Too Easy for Tyreke Evans [Sactown Royalty]

How We Define a Point Guard [Sactown Royalty]

I was always short for my age prior to my sophomore year of high school. And yet I loved playing basketball. My love of basketball combined with my diminutive stature inevitably led me to become a point guard. I idolized Muggsy Bogues and held him up as the proof that I could play basketball no matter how short I was. I lacked the athleticism of a Bogues or a Spud Webb, and I wasn't a very good shooter. Luckily all of this led me to focus on the two aspects of the game that were easiest for me: ball handling and defense. The defense was just about tenacity. The ball-handling was because I practiced endlessly.

I put myself through dribbling drills, I practiced and practiced. I figured I could make a place for myself as a facilitator. The guy who made everyone else happy. I would still shoot when I was practicing, but I would rarely shoot in pickup games or rec league games. I embraced the role of the traditional point guard to an extreme. One year in rec league, it was the last game of the season, and the coach told everyone to start feeding me the ball. He had realized I had not scored once throughout the entire season. I hadn't realized it at all up to that point, I didn't care about my own points.

I'm telling you all of this for a purpose. I'm about to break down how we define a point guard, because it seems that we're spending a lot of time on this topic in terms of how Tyreke Evans fits on the Kings roster. It's important that you know that I have a very traditional view of a point guard, and also that you remember that I was a huge supporter of Ricky Rubio, possibly the most traditional point guard in this year's draft.

These two things are important because I'm going to show you that Tyreke Evans is a point guard.

* Note everything becomes even more fun if the Warriors can bring Fear the Goggles to the Bay.