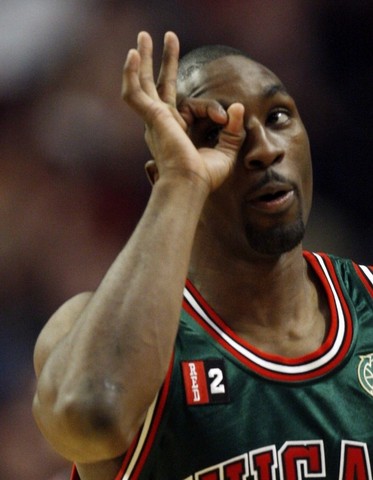 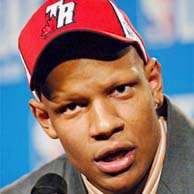 Too bad neither is playing today.

Summer League can be fun and interesting - potential to see some rookies learn the ropes or others showcase why they should be playing in the D League. Taking a quick look at TrueHoop from Day 3 [ESPN] I found a few interesting tidbits...

Marcus Williams managed the game perfectly for the Grizzlies. He worked the ball to the right guys at the right spots, picking up 17 assists in 28 minutes. It helps when Sam Young is nailing jumpers and Darrell Arthur is finishing with authority, but Williams simply controlled the game. "He did a great job getting into the paint," Memphis assistant Dave Joerger said. "We ran different pick-and-roll looks and he picked the defense apart." Williams is a frustrating player to figure out. His pure point skills are apparent almost every time he takes the floor. His court vision is otherworldly. But as selective as he is as a playmaker getting other guys nice looks, he takes a lot of iffy shots himself -- to say nothing of his defense, where he doesn't seem to care all that much.

Yes, the Marcus Williams pulled out 17 assists. I stick by my earlier statements - I wish MW well, but I'm not gonna miss the guy.

Anthony Randolph should have a Summer League exemption. It's really not even fair to the rest of the competition: 24 points on 10-of-13 from the field, 11 boards, five blocks. We saw him finish with his right, run the break in transition coast to coast, post, shoot from the perimeter. It was the full Randolph canvas on Saturday, and he's far and away the best talent here over the first two days.

He's probably right - having Anthony Randolph play in Summer League is just not fair. This guy was bound to dominate - he showed HUGE potential in the second half of the season and was domiminating even the greatest forces in the NBA. (Ok, that's not true, but let's just go with it). Point being - I'm happy to see this guy destroy the competition, makes me believe we don't have any Notorious P.O.B. on our hands.

Juan Summers: Picked up where he left off Friday. After posting 24 points on 18 possessions along with seven rebounds Friday, Summers again worked his inside-out game for the Pistons on Saturday to the tune of 19 points and six rebounds. Summers executes that inside-out game with smarts. He recognizes mismatches in the halfcourt. Against a slower defender, he drives to the hole. Faced up against a shorter guy, he'll get separation and launch a jumper.

Looks we have a formidable foe in today's match up. DaJuan Summers is also playing at a high level. Sounds like he has huge BBIQ and is about to bring the Pistons something nice off the bench this season. Something to keep your eyes on....

Make sure to take a hop on to our SB Nation homies - Motown String Music for their input on Pistons and tonight's game.