Brandan Wright and Marco Belinelli: To Renew or Not to Renew

Share All sharing options for: Brandan Wright and Marco Belinelli: To Renew or Not to Renew

The Warriors trio of picks from the 2007 draft class haven't exactly panned out. With the #8 pick (via trade) the Warriors selected Brandan Wright who has not exactly solved the Warriors 15 years of misses at the power forward position. Then with the Warriors own pick at #18 they surprised many and took Italian shooting guard Marco Belinelli who hasn't exactly been a key weapon for the Dubs. In the second round the Warriors selected shot blocker Stephane Lasme who is currently out of the league. See Golden State Warriors 1st Round Draft History and Just My Imagination for what could have been. 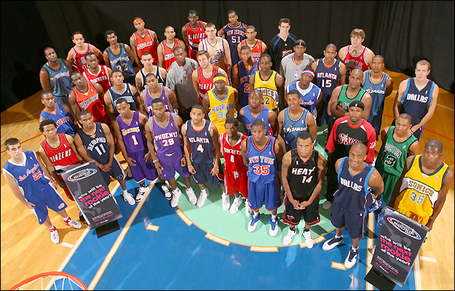 It's decision time on the 2k7 NBA Draft Class.

It's decision time for the Warriors on Wright and Belinelli. Make the jump to see why.

Tim Kawakami writes in So far, it's been an encouraging summer for the Warriors [Mercury]:

Brandan Wright and Belinelli, both deep in Nelson's doghouse as they head into their third seasons, could be unofficial Dead Warriors Walking after Oct. 31.

That's the deadline for the Warriors to pick up their fourth-year options. No pick-up means the player becomes an unrestricted free agent next summer. It's your basic shout of no-confidence.

Even if one or both players' options are picked up, look for Nelson and Riley to try to move both.

First thing's first I wouldn't mind seeing either of these players being shipped out, especially in a heist for that Amare fellow. Unfortunately what could be a franchise reviving move appears to be closer to mortality which each passing day. All I know is Stephen Curry better be worth nullifying this deal for. I sure hope he is. I'm rooting for him.

Brandan Wright: Picking up Wright's 4th year option seems like a no-brainer to me. He is an extremely talented, big man with Inspector Gadget like wingspan. He's still only 21 too, so I doubt we've seen his peak. Current Warrior double-double machine Andris Biedrins was a complete disaster his first 2 seasons in the league. Wright has been bad, but not nearly as bad as Biedrins was and Biedrins definitely blossomed. Wright is far more naturally hoops talented and physically gifted than Biedrins, so maybe there's hope for Wright too in year 3 and beyond. 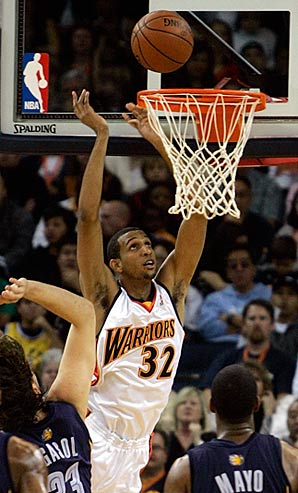 Wright has shown very little of the right stuff in his first 2 seasons.

Reality is the problem though. Wright has been injury-prone, absolutely lost on defense, and has shown less fire than a cigarette lighter. There are some huge physical red flags: he's a 6'9 "big man" who still weighs about 20 pounds less than the shooting guard the Warriors foolishly traded him for and his body looks very, very brittle. Additionally, there are some huge mental red flags: he doesn't seem all that prepared or cognizant of what the Dubs are trying to run on offense and his man-to-man defensive instincts and positioning are very, very poor.

As an aside, I must admit I do feel bad for him. All signs and indications point to the Warriors never really wanting Wright. He was (most likely) a mistaken selection for the Minnesota Timberwolves (way to work the phones Chris Mullin). Then he was (most likely) part of a failed attempt to land Kevin Garnett, before old green buddies Danny Ainge and Kevin McHale decided collusion was the best way to hook up their alma matter with another banner. Just recently Wright was part of a failed attempt to land Amare Stoudemire. Since day 1 the Warriors have been trying to ship off Wright. I don't doubt for a second that this has dramatically hurt his psyche.

Marco Belinelli: I think you can make an interesting case both ways whether or not to extend Belinelli. He is is definitely improving and showing some signs of life, but to me he's very, very replaceable. The Warriors could easily pluck someone from the NBDL that could given them better production than Belinelli. Am I just tossing that out for shock value (like I admittedly do sometimes)? Not this time. Exhibit A: Kelenna Azubuike. Exhibit B: C.J. Watson.

Belinelli was absolutely atrocious his rookie season, which completely erased his fool's gold summer league performance. However to his credit he rebounded extremely well his second season and dramatically improved. He had a nice little 15 game stretch in December where he put up 14.1 ppg, 3.2 assists : 2.1 turnovers, 2.6 rebounds, and 1.0 steals. (The fact that I'm saying those sub-mediocre numbers are a huge improvement over his rookie season and trying to give him some credit here should tell you something.)

The thing that frustrates me most about Belinelli's performance the past two seasons with the Warriors is his extremely low hoops IQ. When the Warriors drafted him there was all this hoopla about how he was a seasoned basketball player with several pro years in the Euroleague's under his belt. I have yet to see anything tangible coming out of that. This is a guy who routinely loses his man on defense on simple backdoor cuts, inanely goes for the offensive rebound when he's the last man back, and is routinely out of position on defense. He's pretty much guranteed to jack up 1-3 "what is he thinking?" shots every night. I have no idea how Belinelli got a reputation as a "great" passer or someone with court vision given his very pedestrian assist : turnover ratio either. In year 1 it was 0.5 assists : 0.4 turnovers (per 36- 2.3 : 1.8) and in year 2 it was 2.1 assists : 1.4 turnovers (per 36- 3.6 : 2.4). 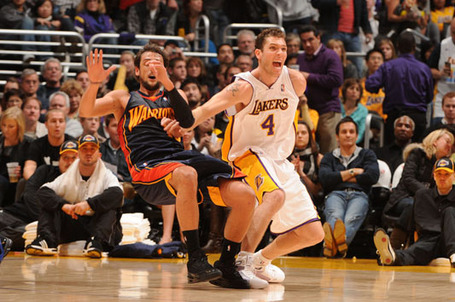 This was probably right after a shot attempt.

For some reason he's somewhat of a fan favorite, which is annoying to see when guys like Azubuike, Watson, and Anthony Morrow have worked their you-know-what off, beat him out fair and square, and don't get half as much love from the home crowd. There is a silver lining to this unfounded Marco mania however. Sample the fans of other teams and there seems to be a lukewarm fascination with him. It also seems like the Raptors and Suns also have some interest in him. Could he be useful as key piece in a trade for Chris Bosh or Amare Stoudemire? Yes, that sounds stupid, but not as stupid as unnecessarily inking Andrea Bargnani for $50 million or needlessly breaking up a talent-loaded team of Shaquille O'Neal, Steve Nash, Amare Stoudemire, Jason Richardson, Leandro Barbosa, Grant Hill, and Matt Barnes without letting them play a full season together.