Polling GSoM: Who are you most excited about watching on the Warriors 2009 Las Vegas Summer League squad?

Share All sharing options for: Polling GSoM: Who are you most excited about watching on the Warriors 2009 Las Vegas Summer League squad?

It's summatime in the Golden State! Jump for the 411 on the Dubs 2009 La Vegas Summer League squad. 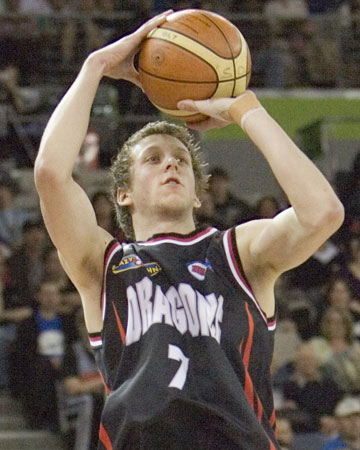 It looks like he's blocking his own shot! [via www.sfgate.com]

I feel like I already know what Anthony Morrow can do- shoot the lights out, rebound the rock, and hustle on D. I'm not that interested in seeing Anthony Randolph (likely) dominate this level of competition, but it will be interesting to see his rebuilt body (just like Morrow's). As you all probably know Anthony's Been Doin' Work this summer [see Randolph bigger, vows to be better by MT].

However, my vote for most intriguing watch on the Dubs summer league team goes to Masala Curry and Law & Order IV. I really don't have a feel for what Stephen Curry and Acie Law IV can do even at this level of mostly players fighting to be NBA 12th man.

For the first time in a long time I'm actually pretty excited about the Warriors Summer League team. I hate to temper everyone's excitement, but I feel obligated to caution you- the summer league is absolutely meaningless (ahem, see fool's gold). It's like the 10th- 12th men and practice squad players dueling it out.

Now that doesn't mean it isn't fun, but it does mean that it's a fairly useless barometer of how players will actually do in the NBA regular season. There's exceptions like AMMO and Kaz of course, but for the most part this is just meaningless fun (in all fairness I guess "meaningless fun" also applies to the Warriors regular season). Having said that let's hope the Dubs summer league team dominates and is simply "Unstoppable Baby!"

NBA Finals Championships are for the Lakers, but Summer League crowns? That's reserved for us over here- thank you very much.

We should have several live GSoM correspondents to get you all the 411 and more from the City of Sin. Ridiculous Scott from the super rididiculous Ridiculous Upside in particular will be giving ridiculous airtime to the Summer League festivities. Will anyone else be making the trip out to LV this year? Scouting reports, interviews, etc. are always appreciated for your golden friends here in the Bay Area who missed the bus to Vegas.

Say hello to Joe Ingles (the player blocking his own shot above):

The 6-foot-8 wing with point-guard skills created quite a bit of positive buzz during pre-draft workouts, but after struggling at the Reebok Eurocamp, Ingles went undrafted.

Summer: school is out, the fog is in, and the Warriors have a shot at winning it all. "It," of course, being the annual Las Vegas Summer League. This year the team will be rolling out two starters from last year’s regular season squad and two new backcourt acquisitions. No, Marco Belinelli will not be dazzling the crowd for a third straight year. With Anthony Randolph on the roster, however, I doubt the Vegas fans need to worry about a lack of excitement.