The Magic were said to be considering extending an offer sheet to Watson last week before signing Barnes, but according to a league source Orlando was convinced the Warriors would match their offer.

Also complicating the issue is that Watson already may have a multi-year contract offer in front of him -- for three years, $4.5 million -- from the Warriors, according to the source.

Come to think of it I must say $1.5 a year for C.J. seems like a steal for a solid end of the bench player who can shoot. I'm a little hesitant to hand out a 3 year deal, but... I admittedly tend to be overly frugal with non-stars. I'm of the mindset pay your top dogs and then go as cheap as you can to fill out the 10th-12th spots. Those players really don't impact your win total. Depth is fairly meaningless. 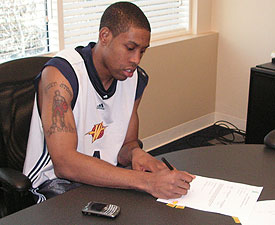 From RealGM Two Plus The Foul - Watson Hopes To Leave Golden State:

As a restricted free agent, the Golden State Warriors also have the option of matching any offer sheet and according to Watson, it’s not a given that they’ll let him walk. "The Warriors might match," said Watson. "That’s what I’m hearing, that they may want to keep me," he said. If Golden State doesn’t keep the Las Vegas native, they’ll likely want some sort of compensation through a sign-and-trade with Orlando. "I heard they were talking about it [a sign-and-trade] if Golden State would agree," said Watson.

Sign-and-trades are very difficult to architect in the NBA and I wouldn't be surprised if this dragged out for awhile. Props to the Larry Riley and the Warriors though. I doubt they really want to hold onto Watson, but they're really trying to milk the Magic here. Maybe they can get a 2nd round pick out of this at the least. Looking up and down the Magic roster, the only player I'd rate worse than Watson who the Magic might be willing to deal for him is J.J. Reddick. With 2-guards and swingmen Monta Ellis, Stephen Curry, Stephen Jackson, Anthony Morrow, Corey Maggette, Kelenna Azubuike, Marco Belinelli, Acie Law, and Speedy Claxton, it would pretty much be pointless to unnecessarily muddy that grouping with another 12th man type player.

I must say that I found this line by my runner-up to the 2008-2009 WDWY (Worst Defensive Warrior of the Year) pretty hilarious:

But the 6'2" point guard also feels he can strive in Orlando defensively.

"I like the defensive focus on the Magic. I'm a player who puts defense first and I tried to make a name for myself with my defense. The effort will always be there," he says.

Hey whatever gets you paid.

This piece from the Philadelphia Daily News should tell you just how crazy GMs and agents can get during free agency Sixers sign draft choice Holiday:

And while the Sixers remain in a sign-and-trade mode concerning unrestricted free agent Andre Miller, a source indicated that president/general manager Ed Stefanski has also been monitoring a situation involving Golden State Warriors free agent guard C.J. Watson and the Orlando Magic. The source confirmed that Watson had earlier rejected a 1-year, $2.3 million offer from the Sixers. If Watson were not to sign with the Magic, it is possible that the Sixers could make a fresh offer. Derrick Powell, one of Watson's agents, said Watson is working out regularly in Las Vegas, where he makes his home.

What GM in their right mind gives C.J. Watson that much money? It's crazy that Watson's agent can reject that offer and get an even better deal for his client. In a summer where GMs are handing out silly excessively lucrative deals to Ben Gordon, Charlie Vilanueva, Andrea Bargnani, and probably C.J. Watson very soon, all that hype about how tough free agency 2009 would be seems like needless hysteria.

Here's the view from Philly via Liberty Ballers:

Both Sessions and Watson fit the bill. Between the two, Watson would be my choice. He shoots the three to a tune of 40 percent, he has experience in a run and gun offense (Golden State), and he has a better chance of sticking around as a role player when Super Jrue takes over. Now, offering either player the MLE does not guarantee anything. If I were a betting man, I would bet that both Watson and Sessions sign elsewhere, but there's nothing wrong with taking a chance. The Sixers literally have nothing to lose.

At least they made an offer. I can’t complain.

That's more than the Warriors have done this offseason in free agency.

As expected our friends in FlOrlando are all over this too:

Why C.J. Watson is No Longer an Option for the Orlando Magic [Third Quarter Collapse]

In theory, the Magic could offer Watson a contract starting at $825,497, which is the minimum salary for a two-year veteran. Watson earned $711,517 last season, and is understandably seeking a raise. According to Marcus Thompson II of the Oakland Tribune, he rejected a one-year deal from the Philadelphia 76ers worth $2.3 million, because he wants a longer-term deal of at least 3 years. Even if we assume he'll take a slightly lower annual salary than Philadelphia offered him in order to ink a three-year deal, he probably wouldn't accept anything less than $6 million. According to Larry Coon's Salary-Cap FAQ (scroll down to the chart, just above Question 20), players signed to minimum contracts can only receive pay increases commensurate with their level of experience in the league--as opposed to some other contracts, where raises are made on a percentage basis--and can only sign for a maximum of two seasons. Thus, Watson would earn $885,120 in his second year with Orlando, Add it up, and you'll see the most he would stand to earn with Orlando is $1,710,617 over two seasons, which is less than one-third of the money he conceivably earn elsewhere, with one fewer guaranteed year. It wouldn't make sense for a player of Watson's age (25) to take such a drastic pay cut, which is why he's out of the Magic's realm of possibility.

C.J. Watson’s future may be uncertain but if it were up to him, he’d be a member of the Orlando Mag... [Third Quarter Collapse]

"I want to play with Orlando," said Watson in an interview with RealGM's Alex Kennedy. "With the four All-Stars and Stan [Van Gundy]."

[Otis Smith] didn't comment on negotiations with either [Matt Barnes or C.J. Watson] except to say... [Third Quarter Collapse]

Ben said it best on Twitter, both parties (Orlando Magic and C.J. Watson) want to work something out but certain variables may not let a union occur.