Belinelli Traded, World Does Not End: State of the Warriors after the trade

Share All sharing options for: Belinelli Traded, World Does Not End: State of the Warriors after the trade

You can generally tell it's a slow news day with the anchors start off talking about the weather. It happens a few times a year. Anchor trying his best to look interested: "Our top story: It's cold! Record low temperatures that break the previous record set in 1973. How are people coping with it? Popsicle sales are way, way down! But not in Seattle, where it's hot! Popsicle sales are at a record level in Washington and Oregon."

And you can also tell when it's a slow sports day when trading Marco Belinelli causes so much commotion. I chose to attribute it to a slow day and an off-season where nothing consequential has happened; the alternative is to admit that a collective insanity has gripped the Warriors fans. Marco Belinelli, we hardly knew ye, and had you not been traded, we probably wouldn't have known much more. With more than 900 Belinelli-related posts in the first 24 hours after it was announced, posts about him now outnumber his minutes played last season. Oh the humanity insanity!

The real news:  this trade was just not that big a deal.

But inconsequential aside, where does this leave us? How has Warrior-dom change? Follow the jump for the break-down. 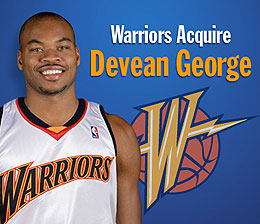 (At least someone seems to be smiling about this.) [via www.nba.com]

The simple story is that this deal was about money. It usually is.

(And it might not just be money in Cohan's pocket, though we cannot rule that out.)

In the short term, this move has almost no cap or luxury tax ramifications. George's salary is for all practical purposes a push with Belinelli's. That Toronto has agreed to pick up the tab does not provide us with cap relief or stave off the luxury tax. The cap and the tax do not care who pays the contract, only who owns the contract and for now, Devean George's contract is the property of one Chris Cohan. For cap and tax computations, he's our liability.

But he's also our asset. Not so much an asset on the court. We can only hope any management reports that Devean is here to play means he's here to play cards or play his stereo after games in the locker room or anything that does not involve him seeing much if any time on the court. It isn't that he's a bad player, it's just that he's, well, what's another word for bad? As an asset, he is an expiring contract.

Of course, if the Warriors didn't exercise their fourth year option on Belinelli, he too would have been an expiring contract, but that decision would have had to happen before the season starts. If they did not renew him, he would have become an unrestricted free agent at year's end with no Bird rights attached. If he wasn't traded, even if he exploded, we'd be hard pressed to keep him. If we traded him mid year, the team he winds up on will be in the same situation. Without picking up the option, his only value is as money off the books at year's end. Which is more or less exactly the same value as Devean George: no future, nothing more than an expiring contract. Without the option, he'd walk and likely be looking for a vet. min. deal or flights back to Milan. Essentially, we cut Belinelli, but in about the nicest way to do this as the Raptors still hold the option on his contract. He still gets paid and may well figure into their plans in the Great White North. Beauty, eh?

Actually, as an expiring contract, George may have slightly more appeal in that do he doesn't cost anything. As a chip in a future trade, George might have slightly more value to any team acquiring him as he's free, his salary paid by the Raptors for the rest of the year. Ok, that's probably not enough to entice a reluctant team thinking about moving a star for salary relief, but it can't hurt. He also has slightly more value in that any team holding his expiring deal can sign him to another contract with fewer cap restrictions than they would for Belinelli. Why would this matter? A sign and trade (yes, I wrote it -- sign and trade -- I'm not proud of it and this is not license for everyone else to jump in with their favorite sign-and-trade Davidson, Watson and change for Dwight Howard) with George could be that tiny bit that makes a deal work. At this point in his career, George might agree for sake of a guaranteed contract for another year, something he might not easily find. It's unlikely, but it's not impossible. So relative to Belinelli's deal, George's expiring deal is a slightly larger asset, likely inconsequentially so, but, still it exists.

So what do our assets look like? In expiring deals that we can use before the deadline, we've got Claxton and his $5,209,454 to go with George's $1,600,000. In the likely event that Nellie and Riley do not decide to pull the trigger on Acie Law's 4th year, you can tack on another $2,216,160. That's $9,025,614 in expiring contracts to dangle, which on its own could be swapped for up to $11,382,017 for incoming players. Package that with Brandan Wright, or do not exercise his option as well, and we can bring back $14.7mil in contracts to a team simply looking to shed salary fast. Those are not inconsequential numbers.

Of course, it's possible that no deal with happen and no deal is about to happen. For the next 60 days George cannot be included in any package. Law and Claxton are also on hold in a package deal until Aug 26th. It is still possible for teams to work out a deal in principle ahead of time, and if parties are really agreeable, it does not appear that it would really put a stop to deals given that a swap would still make a transaction possible before October training camps start.

Anyone know if the Warriors have booked outbound flights for George on or around September 28th?