UPDATE (7/7/09 3:00pm): Is Suns GM Steve Kerr trying to set the stage so it doesn't look like he got hustled into making an Amare Stoudemire for Andris Biedrins, Brandan Wright, and Marco Belinelli (Note: NO Stephen Curry) swap tomorrow? Or maybe he's just telling the truth and Amare won't be headed to the Bay (i.e. a boring 38-40 win seasons if healthy and no playoffs x15 for the Warriors!). We shall see...

UPDATE (7/7/09 9:16am): Add RUMOR: Warriors owner Chris Cohan "highly likely" to sell to RUMOR: Ric Bucher thinks Amare Stoudemire to Warriors still happens and what do you get?

Cohan's potentially quickening sale desires could change the dynamics of a Stoudemire trade.

Basically, Cohan might have reason to trade for Stoudemire, even if Stoudemire has little interest in signing a long-term extension with the Warriors.

That scenario had generally been considered to be a deal-breaker for the Warriors, as generally discussed by Larry Riley, since it could be devastating to the long-term talent base. But if Cohan needs an instant money boost...

I would not expect Curry to be part of the deal. Phx, I suspect, will try to get a future pick as a substitute.

I wonder how they feel about this over at Bright Side of the Sun.

First thing's first. Mark your calendars for July 8th. After you've done that then jump like Amare throwing down an alley-oop from Stephen Curry! 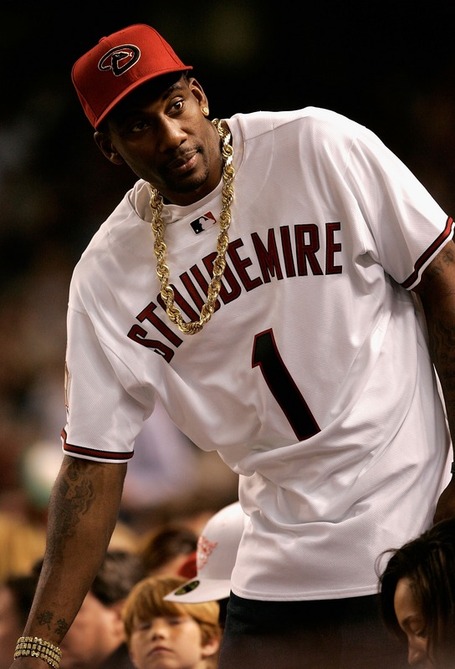 Maybe Amare can help the Giants score some runs too. I was at yesterday's game at the China Basin Palace and I'm not exactly Peter Gammons, but I must say- the Giants' offense is the opposite of Nellieball. Check out McCovey Chronicles for Giant thoughts from folks who actually know what they're talking about. I hear they're pretty funny too.

Sources are mixed on if Amare-to-GS still happens. My hunch is yes because Nelly wants him and Phx wants to move on.

As for Amare saying he wouldn't re-sign w/GS: Phx source says Amare changes his mind every 10 min. Source not putting much stock in that.

And yes- quoting Twitter feeds for rumors? We've reached a new low here. But what can I say? This is Amare Stoudemire we're talking about. AMARE "DUNKIN" STOUDEMIRE! Any way you slice it or dice it, this is would be a franchise altering move for the Warriors.

Don't forget to add us on Twitter for more "Unstoppable Baby!"-ness 140 characters at a time.

Let's make a rule for comments in this article. Before you post anything about the pro's/ con's of Amare 2 the Bay, you must do your research and read to achieve. That means you must have read the previous articles and associated comments on GSoM about the Amare to the Warriors dream (or nightmare if you're so inclined) scenario listed below BEFORE you a post a comment. If it's obvious you haven't done so, then your comment will be hidden.

Educate yourself with the STATs:

Also it's probably a good idea to check out this juicy Matrix-ness from our friends over at Bright Side of the Sun: Marion back to Phoenix - Open Thread