RUMOR: Chris Cohan IS INDEED interested in selling Warriors and was in negotiations with Larry Ellison

Share All sharing options for: RUMOR: Chris Cohan IS INDEED interested in selling Warriors and was in negotiations with Larry Ellison

Over 2,200 GSoMers said that they would be doing backflips if Warriors majority owner Chris Cohan sold off his stake in the franchise. See RUMOR: Warriors owner Chris Cohan "highly likely" to sell. Well it gets even better folks. 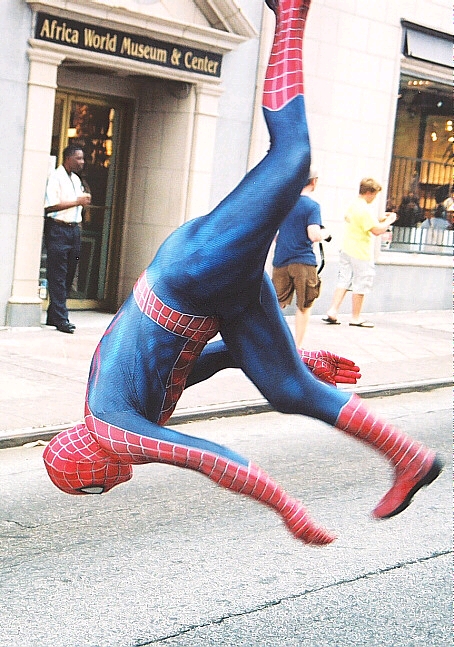 Practice your Spidey flips just in case... [via i18.photobucket.com]

Do a few back flips and then make the jump!

Marcus Thompson writes Cohan is "Interested in Selling This Team" on Inside the Warriors for Inside Bay Area:

I have learned from a few of sources that owner Chris Cohan IS INDEED interesting in selling the franchise, which TK first reported on Friday.

The unconnected sources confirmed Cohan was in negotiations with Oracle billionaire Larry Ellison recently. But Cohan and Ellison's group couldn't reach an agreement. Cohan is "still interested" in selling the team. One source said "he is tired of losing" and another said he is "looking to cash out."

This is phenomenal. If Cohan thinks he's "tired" of The Suck, just imagine how many thousands of Warriors fans are tired of this loser owner and his losing ways.

"If he gets the right offer," one source said, "I think he would sell the team right now."

Someone please make Cohan an offer he can't refuse! I'd do it myself, but I'm currently short a few ends.

"But he's not giving it away for pennies."

Man, there goes my bid.

MT identifies the real uncertainty for what matters most for GSW fans:

Certainly, Cohan's desire to sell the team will have an impact on the product, even if it's just the possibility of major change looming over the franchise. It may make the Warriors more willing to take risks, to speed up the renovation and make this team a winner as fast as possible (a winning team sells better than a losing one). It may put the Warriors in cost-cutting mode (no use dumping money into something you are trying to get rid of).

It makes you wonder. Are we going to see real basketball moves for a change that actually improve the on-court product or more salary dumps a la Derek Fisher to Utah, Jason Richardson to Charlotte, and Jamal Crawford to Atlanta? If the Warriors do pull of the heist for Amare (either with an extension in hand or as a potential one year rental in what could be primarily motivated by a salary dump of Andris Biedrins), that will be one of the interesting angles for evaluation.

Your guess is as good as mine.

This is also an interesting tidbit:

New brain trust? How about A brain trust? I'd bet that within seconds of a new ownership transfer the first guy to get a pink slip has the initials R.R.

This team will be sold within two years and basically, it's Ellison's call on negotiating the price tag.

The Warriors still could be in play for Amare Stoudemire, with either a short extension or with no extension at all.

If it's no extension, you really have to wonder if it's primarily an Andris Biedrins salary dump.