What does discount furniture have in common with Marco Belinelli?

Share All sharing options for: What does discount furniture have in common with Marco Belinelli?

I’ve been searching for the proper analogy for the trade for a while, but then it hit me. 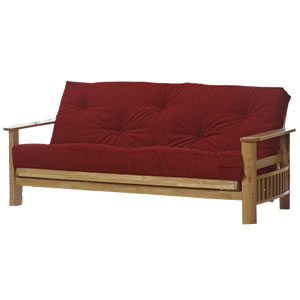 True story: I’ve got a futon frame and mattress in a house I’m renting out. The old tenant who moved in when he and his wife split up needed some furniture, liked it and kept it, but a new tenant has furniture that she prefers, and I can’t blame her.

It’s a comfortable enough futon. It’s not the cheapo model that compacts quickly that many a college student winds up with in the their first apartment when they move out of the dorms. It’s a higher end mattress with a folding frame that’s a cut above the "free frame with mattress." But it’s still a futon and frankly, a real couch is nicer for kicking back on to watch the game and a real bed is nicer for the guest room.

So there’s this futon, an ok one, but still a futon with all the limitations that futons bring with them, and I’ve got to find something to do with it in the next couple of weeks. I could try to sell it on craigslist. Like I said, it’s probably better than many of your basic (NBDL guard quality) futons, but not enough so that someone who wants a brand new one will want to spend much money on it. You can get a new one delivered for not much, so why would you want to pay premium price for a used one that, even if it’s a little better (which may or may not be true as I’d have to inspect the wear and tear) when you can get a new one and have it delivered? There’s not really a great market for selling used futons, so I was ready to give it away. Like I said: I had no use for it and thought there was a chance I would have to rent a truck to haul it away to boot. Might even tweak my back if I didn’t get someone to help haul it down the stairs. Unlikely, but possible. I didn’t want any part of it, but knew that it could a minor inconvenience if I didn’t do something about it.

As it happened, I went out to a nice dinner with friends last night. Hell of a restaurant and a great view if the fog hadn’t covered everything and mentioned that I had a new tenant and needed to haul out the old furniture. I asked the friends if they knew anyone who needed a futon. They jumped on it, saying they could put it in their guest den and offered to pay $100 before I had a chance to tell them that I was giving it away to anyone who showed up with a truck (or felt reasonably comfortable that it wouldn’t crush their car if they strapped it to the roof). I actually didn’t want to take money from a friend for it, so I think I offered to let him pick up the next round of drinks. My problems solved and they were happy to have a futon.

The Raptors just bought that futon. It might work out for them. They might be able to squeeze it into the den, invite some friends over and watch the game, eh. If they didn’t really have a guest room, maybe they’ll get more use out of it since for them, it can once again double as a guest bed when someone had a bit too much Moosehead for the drive home and needs a place to sleep it off or some out of town guests show up and need a place to crash. They might think "man, I can’t believe we got this futon and at such a steal,eh!" But it’s still just a futon, and one that was going to go on the curb with a "free" sign in a couple of weeks anyhow, so I can’t really see how we’d lose any sleep about it. It’s just a futon.

But now there’s some neighbor screaming at the top of his lungs about how I was robbed, that the futon was golden and I’m just an apologist for the ever-evil futon consortium that hasn’t made a good deal on futons for three decades. "How could you possibly just give away a futon?!" he started screaming, with a good deal of incomprehensible babble and some vulgar insults attached.  [And now our unarmed North American friends with universal health coverage have exploded into a contest of whether or not over whose franchise will be sifting through the futon lottery longer?  Insane.]

Really, all this over a futon?

More on the futon: