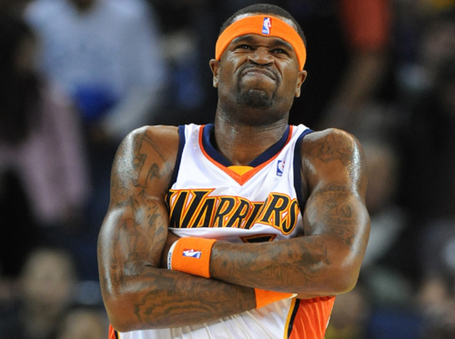 Interesting news that Jax wants to be traded. I wouldn't call it surprising. He's a loyal guy. Loyal to people he's close with, not necessarily the Warriors franchise, Cohan or Rowell.

Look at it from his perspective:

- Great big 2007 playoff run. We Believe. That team never had a chance to play a full season together.

- Trade a key piece of the team, JRich, for BWright (so far a bust) and an unused trade exception, money that goes straight into Mr. Cohan's pockets

- One of his good friends on the team, Baron Davis, doesn't get a contract extension after literally putting this franchise back on the map. So he's gone from the team.

- Another of his close friends on the team, Al Harrington, has been so unhappy with how he's treated, that he demands a trade. Wish granted, he's gone.

- Chris Mullin, the guy who believed in Jax enough to trade for him, was essentially fired.

- The team made no significant move this offseason to improve the team. Drafting a rookie, does not count. Having Monta stay off 2 wheeled motorized vehicles for an entire summer (almost there), does not count either.

So, I ask you, why would he want to stick around? Is it really that surprising?

Cohan and Rowell deserve it. They got fooled, badly. Jax got them to give him a big, fat contract extension that he would never have got from any other franchise. No other franchise would have come close to those dollars and that length. Now they're stuck with a trade demand from the guy who they thought could lead this team to glory.

The fans, we get screwed. The fans are always the last ones anyone cares about. The players don't ever stick around because of the fans. The owners never do anything for the fans. In both cases, it's always about making money. They have a lot, we don't.

You know who's laughing?
Chris Mullin
Al Harrington
Jason Richardson
Baron Davis
And hopefully Mickael Pietrus just because I want to imagine him laughing. He's got to have a funny laugh, I have this image in my head of him laughing like the Count on Sesame Street - Ah Ah Ah

And you thought the Warriors offseason was boring. It's a great time out.