In 2007-08, no team surprised the masses more than the up-and-coming New Orleans Hornets. Their full-time return to the Big Easy after two years as post-Katrina refugees saw them win 54 games and narrowly miss the #1 playoff seed in the jam-packed competitive Western Conference. They were a team on the rise. 2008-09 saw a modest dip in wins (oh what the Warriors would give to 'slide' down to 49 wins), but a seemingly greater slide in future expectations. Has the lustre of hope gone? Are the Hornets still a team to fear? Or are they but another of the strong but still flawed Western Conference not-elites, hoping for a miracle to challenge the true contenders?

(more after the jump)

Rasual Butler (addition by subtraction, traded away to the Clippers for a future 2nd rounder)

Antonio Daniels (to Minn for Songalia and Brown)

All hope and success for the Hornets starts with all-star point guard Chris Paul. Paul is one of the very few truly elite players in the game. The do-everything guard was equally adept shooting (22.8 ppg on 0.599 TS%) and passing (11.0 apg) and his diminutive size did not accurately predict his penchant for rebounding (5.5rpg) from the back-court. Indeed the man with two first names is one of the few players who can realistically be included in discussions about the league's best along with Dwyane Wade, Dwight Howard and, of course Lebron James. And at 24 years of age, he may yet still see some improvement in his already stellar game. Whenever you have a player as good as Paul, you have a shot.

Paul is not a one-man team. PF David West is now a two-time All-Star. However, this probably somewhat overrates his actual contribution as his 21ppg came at only average efficiency and 8.5rpg in 39 minutes on the court is somewhat substandard for a frontcourt player. While still one of the rare "4"s who can provide that sort of scoring punch and allows for a true inside-outside game with Paul, but Karl Malone he isn't.

Unfortunately, the drop-off between Paul and West was mild compared to the drop-off between West and the rest of New Orleans' squad. At least some of the team's regression can be attributed to the loss of rebounding force and solid defensive center Tyson Chandler. Chandler was injured for large parts of the season and, in what appeared as entirely a salary move, Chandler was traded mid-season to the OKC Thunder, only to have the move rescended shortly thereafter when Chandler failed his physical. In the off-season he was again traded, this time successfully, to Charlotte for C/PF Emoke Okafor. Okafor, like Chandler is somewhat limited on offense, but a solid rebounder and defender. Okafor has also been hit by the injury bug in the past. Still, even moderate health from Okafor will be an improvement over the half season the Hornets were forced to make due with Hilton Armstrong, Melvin Ely and Sean Marks.

Wing play was similarly sketchy. Gone for 2009-10 is Rasual Butler, perennial contender for worst regular rotation player. How he managed to garner 32 minutes per night with a lone skill (+39% from beyond the arc) remains a mystery. James Posey was more effective, but played less. Peja Stojakovic is rapidly becoming nothing more than a spot-up 3 point shooter, and while still effective in that regard (and still seemingly unaffected by defensive pressure, hitting close to 40% whether wide open or closely guarded), he is not the player he once was in Sacramento. While the collective 2/3 play of the Hornets could light it up from beyond the arc, they will have to get more dynamic play from someone. With Posey and Peja already in their early 30s, the lone internal candidate will be Julian Wright who is still a mostly unknown entity. Also in the mix at the 3 will be combo forward Darius Songaila, acquired from Minn for Antonio Daniels. Unfortunately, Songalia is one of the few players who might not be an upgrade over Butler.

Chris Paul, continued solid play from West, and more minutes at C manned by Okafor than they got from Chandler will boost New Orleans a bit, but they should still fall short of the top of the Western Conference.

(Warriors connection: Ike Diogu, proclaimed by Indy to be the "key" to the deal that sent Dunleavy and Murphy away from the Warriors, will join his 5th team in as many NBA seasons.)

For more on the New Orleans Hornets check out At the Hive: 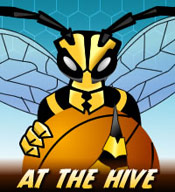