Share All sharing options for: Around the Association: 2009-2010 Milwaukee Bucks: Saving a few buck$

It was a busy off-season for Bucks GM John Hammond. High profile and highly paid SF Richard Jefferson was traded to the Spurs for Bruce Bowen, Kurt Thomas and Fabricio Oberto. Bowen was waived as his salary was only partially guaranteed. Oberto was promptly sent to the Pistons for Amir Johnson, who himself was later traded to Toronto along with Sonny Weems for Ukic and Delfino. Weems had not been under the Bucks' control long himself, having been acquired earlier in the offseason from Denver along with Walter Sharpe in exchange for Malik Allen. In the end, it much ado about nothing, or as close to nothing as the Bucks could manage as all moves seemed to point to getting the team safely under the luxury tax rather than upgrading or even rearranging talent.

Salary reduction seemed to be the name of the game. Ramon Sessions, a gifted young point guard with a knack for getting the ball in his hands and then getting it to the hot hand, leaves the team for Minnesota. The Bucks opted not to match a modest by NBA standards offer from the T-Wolves [Oh if only the Warriors had made such an offer, he'd have at worst solidified the backup PG position behind still untested Monta Ellis or provided a means to keep Monta as a combo guard along side Sessions, who plays bigger than his combine measurements would suggest.] Charlie Villanueva was similarly allowed to depart to Detroit rather than incur the wrath of the luxury tax that keeping him well could have resulted in.

From a business perspective these moves may make sense. It makes little sense to pay premium matching dollars for a team that seemed unlikely to vastly improve on their 34 win season. However, these moves mean that staying at that level may be difficult and it looks like another trip back to the lottery. The ever-bizarre nature of the CBA's tax and cap rules have conspired to slice deep into the Bucks' chances for 09-10.

The cupboard isn't entirely bare. Michael Redd can shoot and score. Luke Ridnour is a competent solution at the point (though certainly not good enough to make Sessions expendable). Andrew Bogut is an above average center who hits his shots and grabs rebounds, but he does not appear to be a franchise cornerstone. These returning starters are joined by 2nd year SF Joe Alexander. Alexander has the athletic tools to excel but showed little as a rookie. He will have to do more, much more for Milwaukee to have any realistic shot at improvement. Hakim Warrick, signed away from the Grizzlies, will likely join Bogut in the front court. Warrick is another top notch athlete, but the net effect is that of a tweener forward, lacking the rebounding ability to solidify the 4 spot and without the perimeter skills to be an effective "3". His high percentage scoring is a plus, but the rest of his game is quietly underwhelming. The most intriguing story may be Brandon Jennings. Jennings showed signs of being an electric playmaker, but whether he can quickly move up to direct an NBA club and whether he can shoot well enough to be a legitimate scoring threat remain to be seen.

Other intrigue? Dan Gadzuric and Francisco Elson give the team a pair of adequate backup centers who both hail from the Netherlands.

Anyone who can get excited about Meeks and the triple-shot of 'meh' in the form of Ukic, Delfino and İlyasova should seek help.

For more on the Milwaukee Bucks check out Brew Hoop: 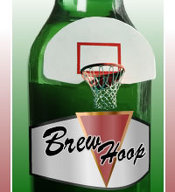