Around the Association: 2009-2010 Boston Celtics- Sheed in Green + Another Answer

Share All sharing options for: Around the Association: 2009-2010 Boston Celtics- Sheed in Green + Another Answer

We continue our golden march around the league in 30 days with the Boston Celtics. 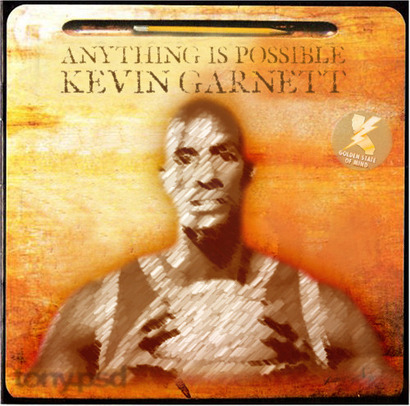 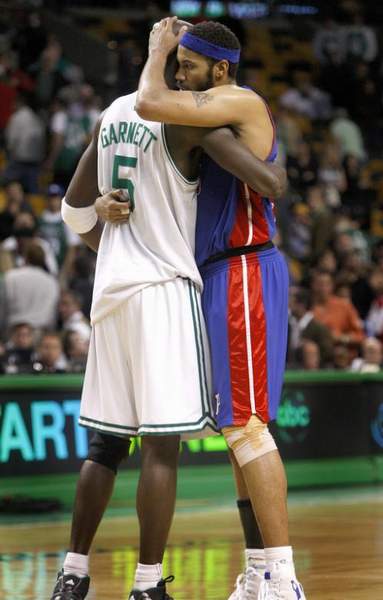 Can you feel the love?

You already know what kind of damage Kevin Garnett, Paul Pierce, Ray Allen, Rajon Rondo, Eddie House, Glen Davis, Kendrick Perkins, and Brian Scalabrine (just kidding- thankfully Danny Ainge beat Chris Mullin before Chris Cohan and Robert Rowell's publicity stunt could add Scalabrine to his Troy Murphy and Mike Dunleavy "core") can do (i.e. 2008 NBA Champs). Shoot, you already know what these cats can do minus KG. Ask Dwight Howard and his trusty band of characters in the Magical Kingdom. These guys epitomize the eternal hoops soul. They know how to win and they don't give up without a fight.

But what happens when you throw in the enigma that is Rasheed Wallace?

RJ to the Snores was interesting. Shaq going to Cleveland in the Suns' first salary dump was big. So was Vinsanity moving from the swamp to FlOrlando. But the offseason move that intrigues me the most is the Boston Celtics adding Rasheed Wallace. 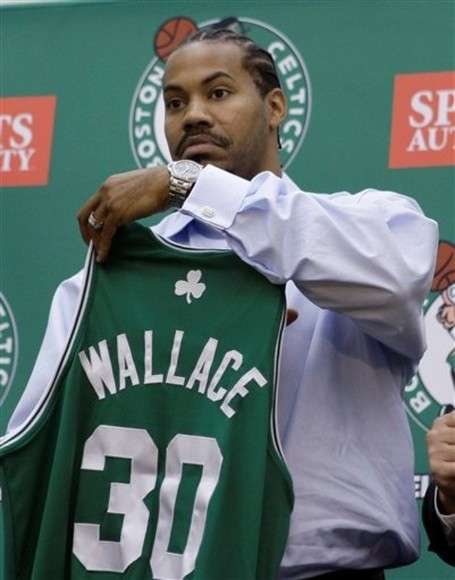 You don't want to mess with this guy in the 2010 NBA Playoffs.

The Celtics are already an intense, somewhat crazy, savvy, sharp, high hoops IQ bunch and Sheed fit thats bill perfectly. I love this addition. It just fits in so many ways- not just adding to their technical foul totals.

Sure Sheed has never even reached 20 ppg and been a fairly mediocre rebounder and shot blocker over his 14 year career, but there's something about this guy that I can appreciate. In terms of raw physical ability I'd put him up there with the KG's and Tim Duncan's of the world. He's in an elite crowd and can seemingly turn it on when he wants to. Sheed has collected wins and his defense (the kind that doesn't show up in the box score) is a big reason why. I hate to rely on what can usually be dismissed as a hoops platitude, but this guy is better than what his numbers tell you. The Celtics got a steal here.

Does it get any better for Beantown hoops? Well it could. 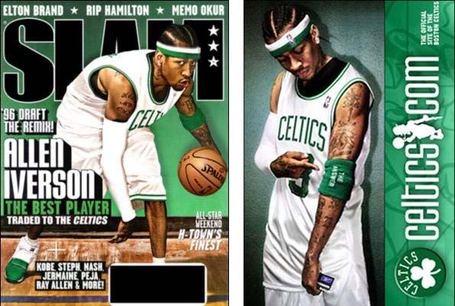 If I were Danny Ainge I'd be looking to swoop Allen Iverson at a bargain basement 1 year deal. It's the best possible situation for The Answer- contending for a championship with some of the best teammates a sure-fire hall of famer coming to the end of a brilliant NBA career could ever ask for. Whether it's coming off the bench as a the greatest 6th man this league has ever seen or even starting in place for Ray Allen, who despite having a nice 2k8-2k9 campaign and a fantastic 1st round series against the Bulls struggled mightily in the 3 losses against the Magic in the semifinals, the Celtics will not be disappointed.

KG, AI, Ray-Ray, Pierce, Sheed, Rondo, and House- how can you not root for these guys or at the very least switch on the TV set to watch them play? It could lead to the most watched NBA Finals (somewhat inevitably against the LA Lakers) of all time. As a hoops junkie this would be Xmas, Kwanza, Divali, and Hanukkah all wrapped up in one nice shiny package.

If you're green with envy over KG, Sheed, Shuttlesworth, The Truth, Rondo, Hayward House, and crew, then head on over to the mighty CelticsBlog: 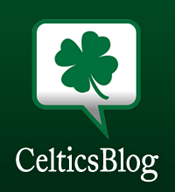 Jeff, Jim, and green crew are my folks, but who needs "17 Banners and Counting" when you're "Unstoppable Baby!"?