Share All sharing options for: Around the Association: 2009-2010 Philadelphia 76ers - Are they (Elton) Brand New? 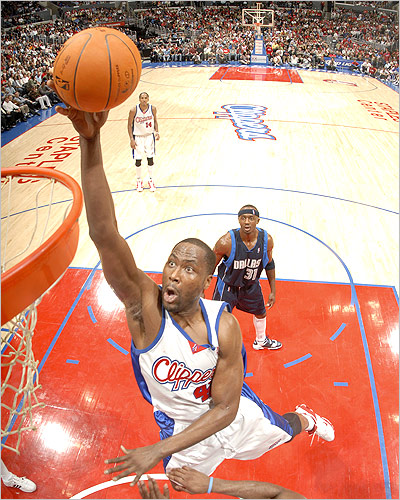 Dare we say that Elton Brand's glory years were with the Clippers?

The Philadelphia 76ers officially get the perennial title of "Best young-team on the cusp of blowing up." By blowing up, I mean that in both the good (Portland Trailblazers or Atlanta Hawks) and bad (Golden State Warriors) kind of ways.  Lingering around .500 for last half decade, the 76ers continue to walk that fine line of mediocrity and decency.  On the one hand, you could say "At least they're a playoff team."  On the other hand, they are in the East...

But if the off-season is any indication, they've opted for the "youth movement" (a much more exciting way of referencing what is sometimes known  as "cost-cutting"), letting Andre Miller walk and finally handing the reigns to their young gunners like Andre Iguodala and Louis Williams.  Whether by design or not, the 76ers have managed to let their core group of relatively young talent develop together over the last few years.  After getting trounced by the Orlando Magic in their final game of playoffs where Raven Simone's attendance might have been the biggest highlight of the whole game, how will these young 76ers rebound from this in 2009-2010?  Will a healthy Elton Brand offer some help?  Better celebrities than Raven Simone in the stands?

More details after the jump.

As mentioned earlier, the 76ers have gotten younger.  Whether they've gotten better remains to be seen. The Princeton offense that coach Eddie Jordan will most likely utilize (as he has in the past) possibly alleviates some of the pressures of forcing unseasoned (Jrue Holiday) and untraditional (Louis Wililams) point guards on the roster from bearing the responsibility of initiating offense like Andre Miller once provided.  Like the Wizards that Jordan once coached -- packed with athletic wing and backcourt players like Gilbert Arenas, Larry Hughes, Antawn Jamison, and Caron Butler --  the 76ers skills and athleticism looks like it might be a good fit for this Princeton offense.

But with AI long gone and Miller, arguably the leader of this young team now gone, you wonder who's team is this?  Or who's ready to step up for this young team?

Is it Elton Brand? One of the big questions (the 80 million dollar question at that) is whether Elton Brand is going to help or hurt this team, with some analysts of the NBA suggesting last year that his game slowed down their offensive system too much.  Perhaps, it's because they had less than half a season to get accustomed to playing with each other.  But his recent history of injuries and games-missed the last two seasons makes you wonder whether the big-man is on the twilight of his career, already.  But if Brand isn't ready to go, Marreese Speights, Mr. Efficiency based on Hollinger's Player Efficiency Rating, will be ready to fill in with a full year under his belt.  Enigma Samuel Dalembert is what he is and most likely can fill in with a decent game every 2nd to 3rd night.

If not Elton Brand, is this Andre Iguodala's team? I would say throughout his career with Philly, he's always had somewhat of an identity crisis in regards to his role on the team.  I mean, the dude has never had his own name.  When Allen Iverson was around, Iguodala also, at times, went by AI.  Then he shared the same first name with Andre Miller.  Would it be too far of a stretch (probably) to say Iguodala's alter ego as Chief Blocka in the Nike Hyperizers video is his attempt at making his 'own' name, per se, in the NBA?

Names aside, the multi-talented wing player has been described as overrated before when prematurely thrust into the leadership role of the 76ers being 'his' team.  Granted, as the saying goes "There's no 'I' in team."  And no one person should bear the responsibility.  But with a team as young as this is -- with an aging paid-like-a-franchise-player-without-the-franchise-player-results-yet Elton Brand -- you wonder whether the young-ins have what it takes right now.  Or do they need some "veteran leadership" with playoff wins under their belt to help rally and mentor them?  Maybe that's what the Primo Brezec move is meant to do?  Or maybe it's the return of the throwback logo that's supposed to inspire them of a once dominant 76ers era with hall of fame players, Dr J. and Charles Barkley.  I say this team at this point, without Miller, goes as far as Iguodala is able to take them.

The more important subtext to this season than who's team this is?  UCLA alums Jrue Holiday and Jason Kapono playing together.  Will their UCLA connection somehow magically predispose them to playing well together?

For more about the 76ers, check out Liberty Ballers 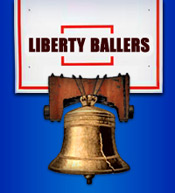