Around the Association: 2009-2010 Portland Trail Blazers - The Fire Keeps Burning

Share All sharing options for: Around the Association: 2009-2010 Portland Trail Blazers - The Fire Keeps Burning

I must say, the Portland Trail Blazers might go down as my second favorite team. Why? They went through some troubled times a few years ago, broke down their team, brought in a new mentality, drafted really well, and now they're succeeding.

Sounds like a pretty ideal situation right? Realize your mistakes and then do something about it. Like make trades. Search for great young talent in the draft and then build upon them. Make it to the playoffs. Win a series and get into round 2. Sure, you might lose there, but you take a look back at your season and understand that your roster has plenty of room to grow unlike the team that just beat you. The old only get older. So you keep your roster and don't make too many drastic changes because you know that it'll soon be your time.

Why does that sound waaayyy too familiar as a Warriors fan? Hmm...maybe someone can answer that for me.

The Old - "The Jail Blazers"

Instead of looking back at the 08-09 season, I thought it might be fun to take a gander at what i considered to be the funniest team ever assemblied. Not "ha-ha" funny but "OMG-this-is-terrible-I-hope-Dave-Chappelle-eventually-makes-a-skit-about-it-to-lighten-the-situation" funny. 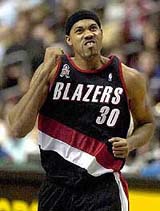 Guess the grass DOES grow differently in Oregon... 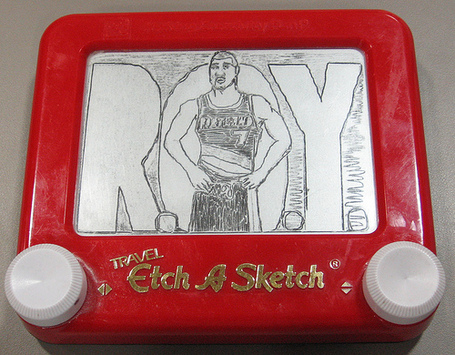 Just out of curiosity, have any of you guys had a look at the Blazers' roster lately?

You've really go to be kidding yourself if you think this team isn't going to end in the top 4 of the Western Conference. Hate all you want on former #1 pick Greg Oden, but HE'S ONLY HAD ONE SEASON IN THE NBA. Plenty of room to improve. He was a beast in college and he WILL BE a beast in the NBA. Of course, who knows how long that will last since all 40 year old NBA players tend to be injury prone.

But hey, just for the heck of it, let's go down the list.

Um...excuse you...this is young developing talent at its finest (forget that they're all on rookie contracts and the combination of guys won't last that long). This team is going to contend. I predict they'll end #3 in the West (Lakers, Spurs, then Blazers) and they'll make it to the Western Conference Finals..to get beat by the Fakers. I'm excited to watch them play and destroy the lower-end Western teams.

Ya ya, there was that whole Hedo Turkoglu thing..but I don't want to talk about that. Go to our RaptorsHQ if you want some science on that.

Like I said, this just goes to show what happens when a team

If only some other team could follow that philosophy...

For more coverage on the Portland Trail Blazers, hit up Blazersedge! 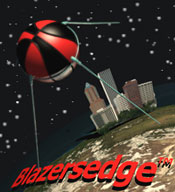