Share All sharing options for: Around the Association: 2009-2010 Utah Jazz - Reset Button.

I suppose one of the toughest things to do with an above average team is to step into the trading ring and make some giant trades to shake-up the roster. Aside from relatively sure bets, I can imagine it would be tough for a front office to look back on the previous year and simply expect a higher caliber of play from the team that they have.

Looks like this is the offseason strategy the  Utah Jazz have employed. Despite loads of debate on whether or not Carlos Boozer would opt out of his contract (or after he said he was staying, whether the Jazz would try to trade him away), when the smoke settled. the Jazz didn't really have a lot of stand out moves that are going to separate them from the 8th seed - first round exit team that we saw last year.

And as a Warriors fan that saw the Jazz knock us out in the second round of our playoff run; I have no problem with their direction. 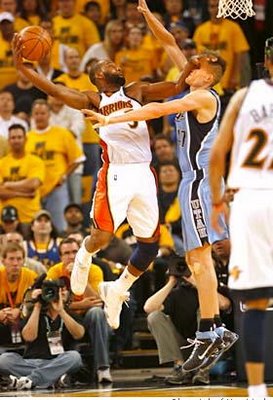 I'll take any excuse I can get to post this picture...

Okay, personal jabs aside, the Jazz do have the tools to enter the postseason. Let's not forget that their rock is sent around by one of the best points in the league, Deron Williams. And aside from the offseason drama, the Jazz are moving into 2009-2010 with Carlos Boozer, Mehmet Okur, AK-47 still on the roster. These guys still have the board pounding big brusiers that seem to serve as the perfect achilles heel for the run and gunners.

As much trash as I gave the Jazz for their first round exit, the truth is that, last year aside, this core group has posed to be a very potent force in this league. Last year Deron Williams, Mehmet Okur, and Carlos Boozer all missed a significant amount of games, resulting in  the Jazz being in a less that opportune position in the first round of the Playoffs. (read: Playing the Lakers)

Ultimately, the question must be posed. Is this Jazz team good enough to win an NBA title? Probably not. But they're good enough to get up there to fight.

For more on the Utah Jazz check out SLC Dunk: 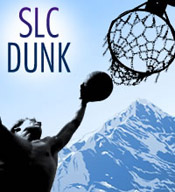