Around the Association: 2009-2010 Oklahoma Thunder: The X Factors

Share All sharing options for: Around the Association: 2009-2010 Oklahoma Thunder: The X Factors

Why the X factors? Well, let's just put it this way. There is very little down, even among the casual NBA fan that Oklahoma has a roster that will grow to do some pretty big things. Centered around the phenom that is Kevin Durant, the thunder also play home to Jeff Green, Russell Westbrook, and (now) James Harden, this team is only on their way up as this core unit learns the ins and outs of each others' games.

So again, why X factor?

When you have a team that everyone generally agrees can be great, every season is the potential breakout year. Even though Oklahoma is only playing it's second year in its new home, this could really be a team to watch. If, for no other reason than for Kevin Durant.

Honestly, I have no idea what to tell you about where this team can go. Lord knows how much work went into forming a better cohesiveness among the core talent that will hopefully propel them above their inaugural record of 23-59. This is a team that is simply in the start of rebuilding since they peaked as the Supersonics in 1996 by losing against Jordan's Bulls. Don't feel too bad for them. They've still been to the Playoffs more often that us during that time. (That's a hard feat to overcome, isn't it?)

With this group of young guns, the Thunder may be poised for a great run.

Will this be the year or Durant?! My guess is yes and no. Yes, KD is going to have another ridiculous season - and although I see the Thundar vastly improving upon last seasons' record, I'm not sure they're going to be quite where they need to be to make a dent in the Western Conference this year.

For more on the Oklahoma City Thunder check out Welcome to Loud City: 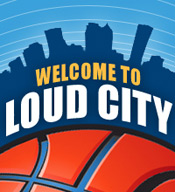