Around the Association: 2009-2010 Charlotte Bobcats- They Do Exist

Share All sharing options for: Around the Association: 2009-2010 Charlotte Bobcats- They Do Exist

In another universe a block-buster draft day trade sent Jason Richardson to Charlotte for the rights to the #8 pick, which was then shipped to Minnesota as part of the deal that would bring Kevin Garnett to the Bay, instantly vaulting the Warriors into title contention.

In this universe, Richardson departed to Charlotte for the rights to Brandan Wright, (seemingly) forever uniting the Bobcats with our Warriors through the collective groans associated with breaking up the "We Believe" squad, groans that, rightly or wrongly join the pantheon of regret that also houses the deals that brought JB Carroll and Billy Owens to the Bay. Oh but if the Bobcats never existed, would we have been able to make such a deal?

Despite anything anyone tells you otherwise, the Bobcats do exist. Larry Brown is their coach. Michael Jordan is their defacto GM, and 597,548 seats were filled with fans at the Time Warner Cable Arena.

The Bobcats have never had a winning season in their 5 years of existance. The 08-09 edition set a franchise record for wins with 35 victories and narrowly missed the playoffs in the Eastern Conference. As futile as the Warriors have been over the last, um, well almost forever, it's tough to scoff at an expansion franchise, so no scoffing. But it is also tough to find a tremendous amount of intrigue from the other side of the continent. Yet so long as Gerald Wallace remains a Bobcat, they remain relevant, as the Gerald Wallace-mock-trade virus appears uncurable.

There was not a whole lot of offensive firepower on the Bobcats roster. Gerald Wallace was once again the team's leading scorer, supplanting Jason Richardson who was traded mid-season to Phoenix for Raja Bell and Boris Diaw. The offensively limited Emeka Okafor was the lone interior threat, such that it was, and while the dual point-guard backcourt of DJ Augustin and Raymond Felton ensured that a sizeable percentage of Charlotte's baskets can with an assist attached, their offense struggled, finishing 27th out of 30 squads in both offensive efficiency and game pace. Without a whole bunch of points on the board, the Bobcats still managed to field their most competitive squad yet due to coach Larry Brown's trademark commitment to defense. (Warriors fans: Defense is the art of trying to impede your opponents from scoring, or so I'm told.) Apparently, if you stop your opponent from scoring at will, you can win some games.

In a shocking move, with Tyler Hansbrough and and Ty Lawson still on the board, "Managing Member of Basketball Operations" Michael Jordan broke with his penchant for drafting former Tar Heels. Forgoing the tradition that saw the Bobcats select Ray Felton, Sean May and (gulp) Brandan Wright, Charlotte selected guard Gerald Henderson out of Duke with the #13 selection. Wright's rights remained with Charlotte for mere moments, May has been traded and, as of writing time, Felton remains an unsigned restricted free agent, perhaps ending Jordan's infatuation with fellow UNC alumni, though head coach Larry Brown was also a Dean Smith deciple.

The offseason also saw action on the trade front. Charlotte moved Okafor, their first ever draft day selection, to the Hornets for center Tyson Chandler. Chandler, if healthy, looks to provide solid rebounding and post defense, but has been even more limited on offense than Okafor. Still, Chandler plays within himself on offense, resulting in rather high FG%. The move may have been more about salary than production though, as Chandler's contract expires in a maximum of 2 years, while Okafor's contract runs for another 5 seasons.

Outlook? Charlotte will flirt with the playoffs in the East because mediocre teams can do that. There does not seem to be much more beyond that though. 36 wins, and 1423 thread with mock trades sending Gerald Wallace westward.

Here's a link to your all time Charlotte Bobcat greats.

Fun fact (or so I'm told): Bobcats' coach Larry Brown's daughter was once married to former Dook standout Quin Snyder. Rumor has it that Quin was cheating on his bride, prompting Brown to demand that Quin return a car he had given to Quin as a gift. Now and NBDL coach with the Austin Toros, Quin is no stranger to cheating. The once head coach at University of Missouri saw his team placed on NCAA probation during his tenure in charge of the Tigers' basketball program.

More on the Bobcats at Rufus on Fire: 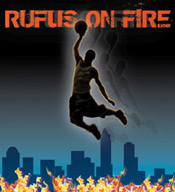