Around the Association: 2009-2010 Chicago Bulls- Ring Around the Rose-y

Share All sharing options for: Around the Association: 2009-2010 Chicago Bulls- Ring Around the Rose-y

After bumpin' atlantaplayalisticcadillachoopz, chillin' out to Anything is Possible by K-Boogie, and recognizing that the BETcats do exist, we turn our attention to the house that MJ built.

Without a doubt the greatest hoops commercial ever made.

The biggest story of the Bulls' previous season was a young man with a very interesting strategy to boost his SAT score- kids don't try that at home. Truth be told on draft day 2008 I actually thought the Bulls should have taken Michael Beasley. It's still early, but right now I don't think anyone's questioning their selection of the 2008-2009 NBA Rookie of the Year Derrick Rose. 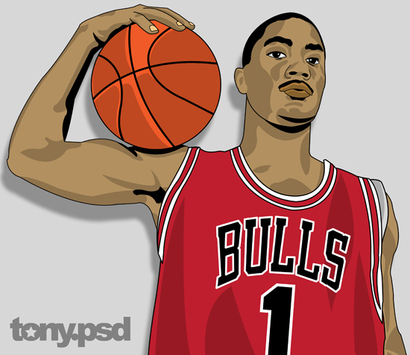 I was perusing trusty old Basketball Reference and this rookie comparison popped out at me (highs across 3 players bolded):

Based on their rookie stats how would you rank these 3 rookie PG's NBA futures?

A is Chris Paul, B is Derrick Rose, and C is Deron Williams. I'm not really sure what or how much to read into that, but interesting to say the least.

(Side note does hoops nation realize that the "bigger and stronger" Williams is a far inferior rebounder to the "smallish" PG with two first names? Pretty amazing.)

I'd rate these two as legitimate superstars in the league for years to come and I think most would agree- even the delusional and low IQ masses of LA Laker fans (sorry had to get that in there after being surrounding by the Faker-ness during my recent excursion to SoCal aka Shallow Cal). The question everyone in Chicago and around the association should be asking themselves is does Derrick Rose got next? It'll be interesting to see if he make that leap. I know I'm curious.

Call me skeptical though. First thing's first he has to take much better care of the rock. That 7 game 1st round series and all those insane OT's with the Boston Celtics last spring was absolutely thrilling. But one thing stood out in my mind while watching that series. Sure Rose was scoring a ton, but he was an absolute turnover machine. If I remember correctly there was one game in the 4th quarter where he had an unfathomable number of turnovers in a row and his coach was hesitant to let him even bring up the ball. He simply could not take care of the rock and make good decisions- a critical element for any NBA PG. Take a look at his turnovers in that series against Boston:

(He'd sure fit right in with the young and dumb turnover prone 2008-2009 Golden State Warriors!)

This is the PG ROY we're talking about. Maybe it was an anomaly and maybe it shouldn't be as big of a precaution as I'm making it out to be, but it still makes me wonder. We shall see soon enough.

I honestly don't see how the Bulls really improved this offseason. They lost Ben Gordon to free agency (I give the Bulls props for not trying to ink him to anything like the Detroit Pistons silly 5 year $55 million deal) and although I'm not a huge fan of his game his absence will make things tougher for Rose and crew.

To make a leap forward or even maintain their .500 record of a season before, the Bulls are going to need a major trade a la Carlos Boozer (but don't count on it- the Bulls have repeatedly shown a complete inability to pull off a trade for an All-Star caliber player the past few seasons even when it seemed like the player was theirs for the taking) or some in-house development (but we've been hearing that for years from guys like Luol Deng, Tyrus Thomas, and if you want to b e strict Joakim Noah). I expect Rose to continue to progress, but that improvement will most likely only begin to account for the Gordon loss.

Unfortunately it appears the Bulls are saturated with fairly middling young talent. No future All-Star/ All-NBA appearances seem to be in sight for the Bulls young core of Deng, Thomas, and Noah. They're nice players, but not the kind you build around. The Warriors analogy would be Andris Biedrins, Kelenna Azubuike, and Brandan Wright (being extremely generous with that one).

Despite the shortcomings of this roster the 2009-2010 Chicago Bulls are pretty much destined for a low playoff seed thanks to the Leastern part of the Eastern Conference. That's all fine and dandy until you realize that this means a date with the Boston Celtics, Orlando Magic, or Cleveland Cavaliers.

Ain't no Bull over at Blog-A-Bull:

The Cleveland Cavaliers are on the Around the Association clock...