JUMP to find out the answer!

A: Maybe what David Lord from DallasBasketball.com says:

If there's really a possible three-way brewing between Charlotte, Golden State and Dallas, the tea leaves keep pointing me to Monta Ellis rather than Stephen Jackson as the marquee talent being discussed in that deal. A quickie look:

*The Warriors would be clearing out a huge unwanted contract...

*The Mavs' role would presumably be to forward "The Buck Shot'' and a cheap/expiring contract or two to the Warriors; then they would take some of the talent (and payroll) changing hands off the table, with Golden State's ultimate benefit being huge salary reduction and a No. 1 pick from Charlotte.

Not that I'm against trading away Monta Ellis one bit- putting aside Moped Gate he's a very flawed NBA cornerstone-but primarily for a "huge salary reduction"? Sigh. We've seen this countless times under Chris Cohan's Warriors regime and the results haven't been pretty. A look at the recent past...

What happened after the Warriors dumped this guy for "huge salary reduction" right after WE BELIEVE? 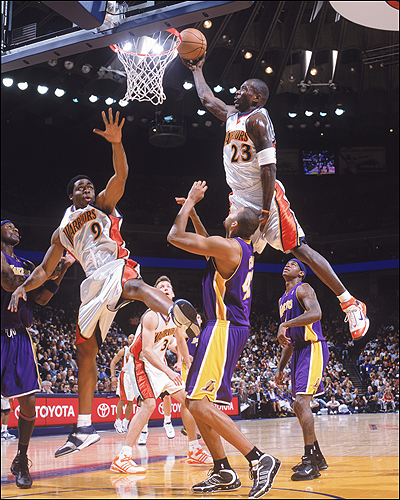 A picture this good doesn't even need a caption.

Barely missed the playoffs after making it on the last day of the regular season as the final seed, finally ending a 12 year playoff drough.

What happened after the Warriors dumped this guy for "huge salary reduction" right after that 48 win season? 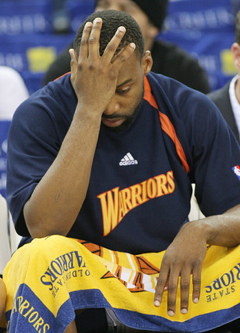 Hope you're enjoying the "salary protection" R.R and company!

What will happen if the Warriors dump this guy for "huge salary reduction" right after the return of WE SUCK? 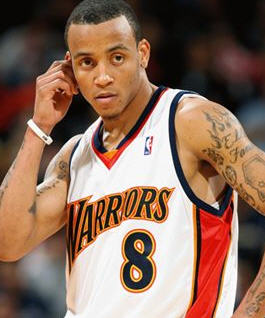 I can only promise you 2 two things: 1) the Charlotte Bobcats do in fact exist and 2) the curse of the Dampier on the Mavs is pretty hilarious to watch from afar if you lived through that dream team center tandem of Erik Dampier and Adonal Foyle during the earlier part of this century.

If you want to go Bobtastic check out Rufus on Fire.

If you can handle the Mav-ness check out Mavs Moneyball.