Houston, we have a problem. Yes, it is a cliche saying, but when your star center and face of the franchise is expected to miss the whole season, when your next big gun last played a whole season in, well, never, things do not look good. Conventional wisdom says that the Rockets will not be able to build on their impressive 53 win season, but look instead to be headed for the abyss. 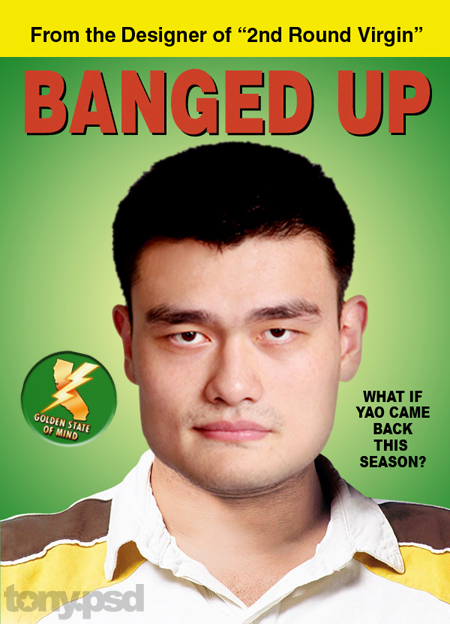 For better or worse, the Rockets seem to defy conventional wisdom. In an NBA where scorers garner most of the attention, losing Yao and looking to rely on an injury plagued 30 year-old who is himself coming off season ending knee surgery seems to suggest doom. But the wisdom of Rocket's GM Daryl Morey means the Rockets have a chance to remain competitive, and if they do, it will be another dagger in the heart of conventional wisdom.

A year ago, the Rockets won 53 games, good for 2nd in the NBA's Southwestern Division. In the playoffs, they took the eventual champion Lakers to a game 7, this *despite* losing Yao Ming to an injury when already down 2-1 in the series.

The Rockets were without a draft choice. [Note: the Rockets did acquire Chase Budinger in a draft-night trade with Detroit, who had taken former Wildcat with the #44 pick in the 2009 draft.] The big acquisition was Trevor Ariza, a defense-first forward who can guard multiple positions who would appear to replace Ron Artest, an older defense-first forward who can guard multiple positions. Ariza is younger and more productive than Artest who survives more on reputation than on production at this point. Still, this likely upgrade is overshadowed by the loss of Yao.

Did I mention that Yao is unlikely to play? Did I mention McGrady will be playing for a new contract somewhere, and that should be motivation to give it his all, though motivation has not been the problem so much as staying healthy? His age really does not adequately describe the wear and team Mr. McGrady has suffered. His return to his former all-star form, or even regular playing time, is doubtful. The contraction situation would not seem to be as much of a factor in his production as simply being able to get out of the trainer's room. Motivation only goes so far against the reality of microfracture surgery. And if the Rockets wind up going nowhere fast, his $23+ million expiring contract could be a mighty appealing piece for a team looking to shed massive salary and/or looking for a productive piece to put together a championship run.

But the eventuality of collosal failure in Houston may be premature. Houston anchored their 20 Though not equipped with Artest's reputation as a lock-down, Ariza is a fantastic defender who exceeds Artest on the boards and is a much more disciplined shooter. Ariza's performance in LA should not surprise anyone and was unlikely a result of LA's "system". He looked similarly good in Orlando before LA stole him away for next to nothing. Ariza thus joins a team that was 4th in overall defensive efficiency and loaded with players who are simply very good at securing and keeping the ball. Shane Battier's positive effect has been chronicled elsewhere. Luis Scola, Carl Landry and Chuck Hayes can provide bruises and rebounds in the front court and Kyle Lowry and Brent Barry (yes, he's still playing-- yes, he's still playing well) were quietly effective in the backcourt. No, they do not have the dynamite scorer (although Aaron Brooks did seem to rise to the occasion in the playoff) suggesting that the offense, such that it is, may not have a central focus should McGrady not bounce back and without the injured Mr. Yao.

And without the scoring punch, without the all-star firepower to put big points on the board, this will be a test. Can a collection of low-usage but efficient scorers with a knack for controlling possessions really remain competitive? If they can, Daryl Morey more than deserves executive of the year for putting together a solid squad without Yao. If not, then this squad might just be the least entertaining collection of players in the Association.

Oh, and Yao Ming is probably on the bench for the whole season.

Prediction: 43 wins and a whole lot of excuses for why every game they win still doesn't indicate that the conventional wisdom is wrong.

For more on the Houston Rockets check out The Dream Shake: