GAME THREAD #36 - Warriors vs Cavaliers - Who drives to the paint better: Monta or Lebron?

Share All sharing options for: GAME THREAD #36 - Warriors vs Cavaliers - Who drives to the paint better: Monta or Lebron? 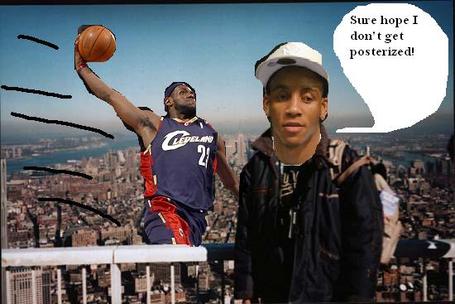 If you're going to the game tonight, someone must like you because you definitely got the gift of a superstar. King James (Lebron James is his government name) is in town and his game is seriously looking less and less human-like. If anyone caught yesterday's Cavaliers vs. Trailblazers game on ESPN, you probably saw James effortlessly score at will against a solid Trailblazers team. In the span of about a minute in the first quarter, James hit a fadeway, a floater, and a coast-to-coast layup having blown past 4 defenders with a foot-speed that rivals Monta Ellis' or Usain Bolt.

It's remains a mystery to me how a 6'8 260 pound guy has that much speed but also coordination. How can someone this large in size have complete command of his muscles and the ability to make muscles this big? It's also amazing to me how someone that large is nimble enough to weave through defenders with such grace. I get the sense that most guys his size would just lower their shoulder and knock a dude over for a charge.

On this flip side of things, you have Monta Ellis... often times the smallest guy on the court, rising above the Tim Duncans, Kevin Garnetts, and Yi Jianlians (ha!) of the league. So my question for tonight is not who's going to win or lose this game, but who has more impressive half-court finishes in the lane: Ellis or James?

Ellis, too, makes driving into the lane look extremely effortless. As Jim Barnett has said repeatedly, "You know exactly what he's going to do, but you just can't stop it." From the comforts of my couch, it looks to be all foot-speed. There's nothing remarkably fancy about his footwork or handles (Allen Iverson) or his creativity in the air (Michael Jordan). Ellis is plainly, "fast." But damn, is it amazing to watch or what?

Like Ellis, I too find James to be "fast." His drives to the hoop, in my opinion, aren't that creative either. He just kinda bee-lines to the hoop and somehow finds the creases the size of a doorway between a packed painted area with 250+ lb men lurking.

Both Ellis and James defy what's expected of people of their body-types. I'm in no way saying that Ellis' athleticism matches what James can do. But seeing what they've done so far this season, it makes you excited about the kind of spectacle we may be witness to tonight.

As if James wasn't enough to worry about, the other dudes on the Cavaliers may pose some problems for the height and muscular-deficient Warriors. You can't teach height and Zydrunas Ilgauskas, Anderson Varejao, and JJ Hickson got it. Ilgauskas is a pretty skilled big man and JJ Hickson looks like he's gonna blow up soon if he can get his defensive assignments correctly. With footwork like Hickson has in the paint, you would have thought he was a backup dancer or body double for Channing Tatum in Step Up. I rarely seen him play though, so for the Cavs fans that may be on here, please let us know if Hickson is for reals, or if he's just Anthony Randolph-ish. That meaning, tons of potential but problematic "basketball iq."

The Warriors are going to have to work extra hard as always getting rebounds and, of course, containing that Lebron James guy to 30 points. Life with(out)* Anthony Randolph will be mildly frustrating, mostly because you felt like he was finally getting, it "getting it" meaning not making careless turnovers and finally hitting open jumpers again. But "the breaks" (hopefully not Randolph's ankle) is the story of this season for the Warriors. Tonight might be one of those 'moral victory' type of nights.

Ellis goes for his recent 5-game average of 28.6 points

Anthony Parker goes Candace Parker and goes for 20, 10, and 3 (assists)