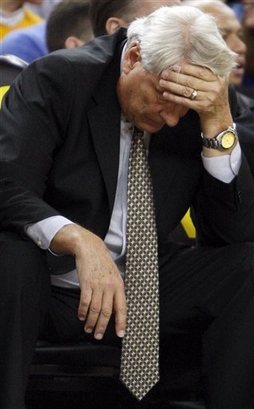 (Nelson: Is breaking the all-time wins record really worth it?)

20 seconds into the fourth quarter with the Warriors down 10, Monta Ellis awaited to shoot his second free-throw as substitutions came in and out.  The camera zoomed in on Monta looking backwards to see who was entering the game, which we catch him mouthing "damn!"  The camera quickly panned to the scores table showing Lebron James stepping onto the court, fitting his mouth piece into his mouth.  Perhaps Monta vocalized "damn!" because he had missed the first three throw, which the Warriors had struggled so much throughout the game converting easy buckets (layups in particular).  Perhaps he knew how much harder it was going to be cut the lead now that Lebron James, having sat out a large portion of the third quarter, was back in effect.

Either way, this short scene during yesterday's broadcasted epitomized the relationship between the Warrior's fate last night and Lebron James' incredible dominance on both ends of the floor.

For all those that caught the game, you all surely know that the outcome was not indicative of what really happened on the floor.  Sure, the Warriors valiantly fought back from 10 points down in the last few minutes to keep the game exciting.  True, you could make a strong argument that the superstar calls that Lebron received from the officials down the stretch in the fourth quarter pretty much predicted, if not sealed, a victory for the Cavaliers.

But the 3 point margin, which at one point was up to 16 points in the third with Lebron barely touching the ball on offense but touching the ball plenty on defense (more on that later), shows us not only how lopsided this game could have been but also the terrible hex on the Warriors' big men this season.

I completely forgot all about Shaquille O'Neal in my preview because I was completely consumed by the rest of the Cavs beefy frontline.   Before the unfortunate loss to Ronny Turiaf to an ankle sprain in the second quarter (x-rays show negative), the Warriors seemed like they were relatively competitive in the paint.  Without Turiaf, the Cavaliers destroyed the Warriors on the boards, particularly as it came to second chance points.  With Vladimir Radmanovic the biggest Warrior on the court (with Biedrins ineffectively collecting fouls like baseball cards or "The Situation" of Jersey Shore does ugly women), Big-Z looked like King Kong in the paint with the little Warriors bouncing around him like the helicopters and planes pointlessly shooting bullets.  But honestly, to me rebounding, too, is a lot about effort and the Warriors never seemed to be in position to grab rebounds to begin with.

By half-time, the rebounding disparities between the teams nearly two-to-one  with the Cavs clearly winning this battle without Turiaf.  The Cavs had collected 28 rebounds to the Warriors 18, but had 9 offensive rebounds to the Warriors 4.  The size was clearly hurting the Warriors, but it didn't help that the Warriors continually fouled their big men senselessly at point-blank range to allow them to convert 3 point plays.  Maybe he was flopping, but Anderson Varajeao, constantly, found the soft spots in the Warriors defense by flashing to the basket even when there was no dribble penetration by Lebron or anyone else.

Luckily, RadVlad played tough and crashed the boards when no one else on the Warriors could.   I've never liked RadVlad as a player, mostly because I thought he has a pretty decent skill set (on paper) but was never fully able to put it together (except against the Warriors maybe).  And while his shooting woes make my Dream League stats look half-decent, RadVlad is literally the last big man we can count on at this point who actually has a diverse enough skill to make opposing defenses work a little harder. 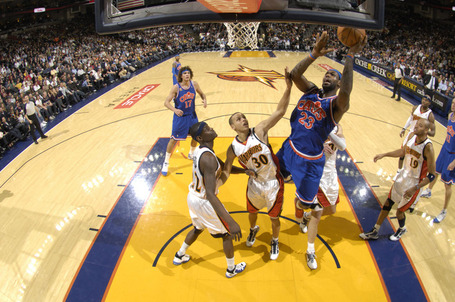 Monta getting blocked 5 times in the 3rd Quarter

Monta finished the third quarter shooting a horrendous 1-12 with a bulk of those shots being blocked.  5 shots were blocked to be exact.  The frustration (watching him get blocked and also the no-calls) eerily reminded me of Stephen Jackson and not in a good way.  With his shot not falling, Monta seemed intent on getting to the line to the point that this tunnel vision clearly didn't take into account that Lebron James, Shaquille O'Neal, and Big-Z were awaiting him.

I'm not faulting Monta for wanting to take it to the hole.  I mean, Lebron James could have done the same thing all 5 times and probably gotten the call all 5 times, too.  But for someone with a quickly expanding game , you wonder why Monta didn't try some of his typically nifty moves in the third quarter (or first half).  By this, I am specifically talking about the post-up move AND turnaround fadeaway jumper he made early on in the fourth quarter.  We've seen him execute these shots many times in the past with extreme high efficiency.  Why not try this earlier?

Monta is one of the best finishers in the game, hands down.  But I was shocked to see him repeatedly try to go against Lebron James, who was just lurking in the paint, waiting to turn away his shot.  This leads me to my next point...

The decisive third quarter exemplified, in my opinion, how much worse this game could have been.  In this quarter, Lebron James basically played free-safety and let his teammates run the offense.  I'm pretty sure he attempted, at most, 2 shots all quarter, deferring to his teammates who seemed to easily make baskets without him.  When he did shoot, he deliberately chucked a three and swished it.  This quarter we witnessed Lebron creating havoc on the defensive end, sending away a few Monta drives while getting a few steals and disrupting more than a few shots on some pretty terrible Warriors fast-break opportunities.  The Warriors run their fast breaks pretty poorly but the looming presence of Lebron in the backcourt clearly made converting these, typically easy opportunities that much more difficult.

Perhaps my interest in covering Lebron's game at length here IS a man-crush as someone had posted in the preview.  But there's no denying that his ability to defensively shut down the Warriors in the limited minutes of the 3rd quarter before sitting out show shows you what kind of a player he is and what he can do to mediocre teams.  Also, the fact that he coasted for a bulk of the period shows you what he COULD have done to the Warriors if he wanted, which he basically did early in the fourth quarter as he scored 8 straight points in a matter of 2-3 minutes with the same post-up move against Cartier Martin and Corey Maggette.  If he wanted to, Lebron probably could have put this game away much eariler. 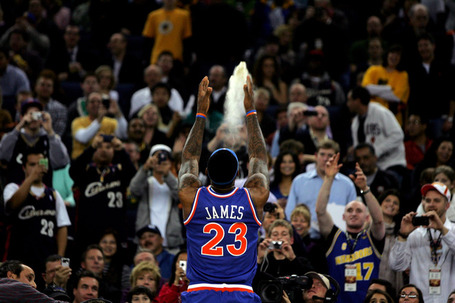 The maturation of Stephen Curry

It was nice to see Stephen Curry a little more deliberate with the ball today and finally being more assertive.  I knew that a college player that was able to score 30 points a game must have some translatable offensive game in the pros -- unless your just a pure shooter like JJ Reddick or Danny Ferry.  But Curry's shot looks like it's finally falling from long range.  I'm more impressed with his handles  and his craftiness that helps him get to the hole and convert high percentage shots.  When Curry runs the breaks, too, great things seem to happen as he's got the court vision the Warriors need to get our scorers the ball in the right places (Morrow and Monta, please take note).   Is it me or does anyone else like the fact that Curry likes to shoot the 10 foot floaters in the lane?  I'm just juiced that Curry has a wide repertoire of offensive moves that we're beginning to see.

Also, did anyone find it cute when Jim Barnett mentioned during the broadcast that Stephen Curry and Lebron James are friends and still text each other regularly?  Perhaps Stephen Curry can recruit Lebron to the Warriors this summer....HAHAHAHAHAHAHA. 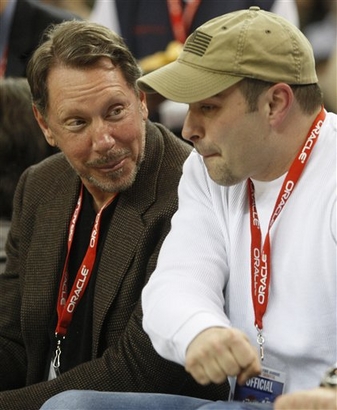 (Midway through the game, Larry Ellison soon realizes he was mistaken. He meant to purchase the Lakers, not the Warriors)

Other notable moments from the game

I give up to Stephen Curry.  He once again had nice all-around offensive game with 21 points, 7 boards, and 5 assists.  The last assist, a behind the back pass, to a wide open Monta in the corner was a heady play that exemplifies the types of good things that Curry can do and hopefully will do more in the future.  Monta Ellis also deserves much consideration as well, but I just can't get over the poor shooting and the 5 turnovers.