Share All sharing options for: Game Thread #37: Warriors vs Heat - Wade (Gift of a Sup-a-sta) 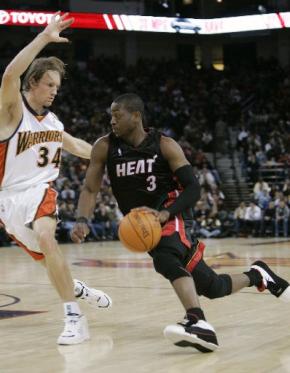 Can't pass up a chance for some Funleavy Foto Fun

It's nice that Warrior fans get treated to watching two of the game's best in back to back home games. First LeBron's near triple double. Tonight, the crowd gets to see Monta face someone at a similar position. It's part 2 of the gift of a "sup-a-sta" - Dwyane Wade. He just attacks and attacks and attacks. He's relentless - fall down 8 times, get up 9 (remember that commercial?). Hopefully Monta will be guarding Wade and hopefully, Wade will be guarding Monta. We could see Cartier Martin on Wade but I'm hoping the majority of the time is our best player vs their best player.

The Miami Heat cannot be happy with an 18-18 record (the Golden State Warriors would be happy with 18-18). Dwyane Wade is going to be a free agent and I seriously wonder if he's going to stick around on a team that isn't very good and doesn't look to be getting better.

Who should be more worried, Miami for potentially losing Wade or Cleveland for potentially losing LeBron?
Nice that Warrior fans get treated to watching two of the game's best in back to back home games. First LeBron's near triple double and now Wade who just attacks and attacks and attacks. He's relentless - fall down 8 times, get up 9 (remember that commercial?). He really earns that paycheck.

The player who's really not earning his money is our young center, Andris Biedrins. Wow, has he been bad. He can't score and can't defend. I'm not sure what's up with him, but he needs to turn his season around quick. He already lost his job to Turiaf, but might get to start if Turiaf can't play (he's questionable). C'mon Andris, earn that paycheck or we're going to be making jokes about how you spend more time in the tanning booth than the basketball court.

Who should be more worried this offseason of losing their superstar?