Share All sharing options for: RECAP: Warriors 102, Heat 115 – Thanks for the Gift 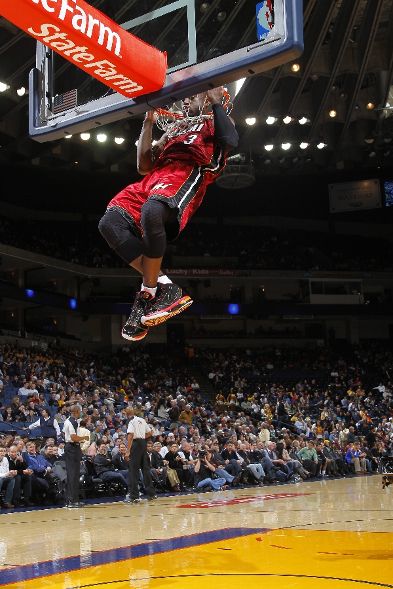 For those who took advantage of the gift of a superstar, you were treated to a great gift tonight - Dwyane Wade. He was ridiculously good tonight. Thank you Golden State Warriors. Even better, the Warriors were soooo generous that they even gave you a former All-Star, Jermaine O'Neal, to play like he's an All-Star and a #2 overall pick, Michael Beasley, to play like he's going to be a star. 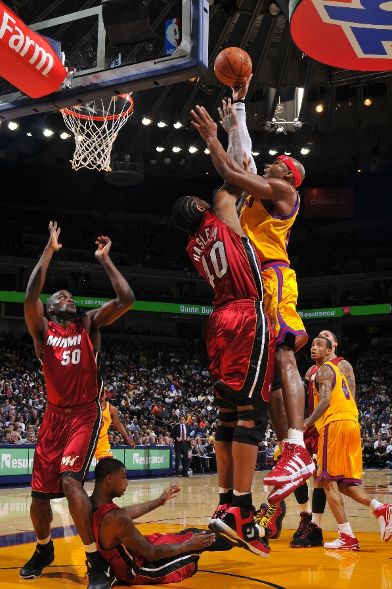 This game got away from the Warriors in the 2nd quarter when Corey Maggette left the game with 7:30 remaining because of foul trouble. He was having a great game at that point with 15 points in 16 minutes. When he left, the Warriors were up 4. And then the floodgates opened. Heat bucket after Heat bucket came pouring in and that 4 point lead quickly turned into an 8 point halftime deficit.

It's amazing the turn around that Maggette has had. I ripped him a long time ago and kept writing his name as MEgette. But since then, he's played much better and Nellie plays him plenty of more minutes. The big change? He's getting to the line much more often which means he's taking fewer long range shots - not his game. He's been the Warriors second best player and many times has been the best out on the floor such. Tonight, he was the Warriors best player - 25 points, 7-11 from the field, 11-11 from the line, 6 boards, 4 assists, and 2 steals. Glad to see him working hard out there. 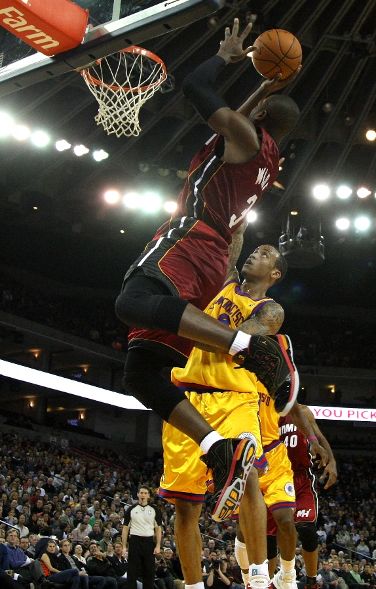 Back to Wade, O'Neal and Beasley. 29-43. No, not what I hope the Warriors record will be, that's how well the Heat trio shot. 67%! This game was all about Wade's great 2nd quarter, O'Neal's turn-back-the-clock 3rd quarter, and Beasley's ability to complement them.

Wade was magnificent tonight. Nothing flashy, just doin' work. He gets in the lane at will, gets to the line (15-15 tonight), and hits jumper after jumper to the tune of 10-15 from the field - 35 total points. Throw in his 7 boards, 9 assists, 3 steals and aside from his 7 turnovers, he was awesome. The superstar came out to play tonight.

Then there was Jermaine O'Neal. He looked 5 years younger tonight. He was moving quick which allowed him to get wherever he wanted on the floor for layups, fadeaways, or jumpers. It sure didn't help that Andris Biedrins and the Warriors big men made him look great tonight. He was 11-15 from the field and finished with 24 points. Oh and remember, this guy is averaging 12 points per game.

Lastly, Beasley made everyone remember why he was so highly touted out of college. For being 6-9, he's super smooth and mobile. He can go inside and out. In his 32 minutes, he dropped 19 points on 8-13 shooting.

As far as the Warriors, they just can't stay healthy. After Ronny Turiaf got hurt again against the Cavs, 2 more Warriors got injured - Vlad Radmonovic and CJ Watson.

Andris Biedrins played much better tonight. That means he had one good half. The first half he played well and was on his way to a double double - 6 points, 6 rebounds. Oh but Jermaine O'Neal ate him alive in the 3rd quarter. It was O'Neal's big quarter that really put the Warriors away. Heck, the Warriors were making a run in the 4th, and got the lead down to 8, so what does O'Neal do? He hits a big jumper to go up 10 and the Warriors never made another run. Biedrins finally showed us something, but he's still got a long way to go.

Miami turned up the heat (get it?) on Monta, just like the Cavs did. Whenever he tried to drive, there were about 10 defenders waiting for him. He didn't have a whole lot of room to operate and with not too many other players to rely on to score, the Warriors struggled to get points on the board. Teams are going to learn from the Cavs and Heat and how they made it difficult on Monta and forced others to score.

Could have been Corey Maggette for the better numbers, but Morrow's performance came out of nowhere and kept the Warriors in the game in the second half. He dropped a total of 24 points, shot 8-14 from the floor and 4-5 from the land of plenty. This monster game, well more like second half, came out of nowhere. It's been such a long time since we've seen this Anthony Morrow. Was it the big 3 at GSOM Night 8 that got him his confidence back? 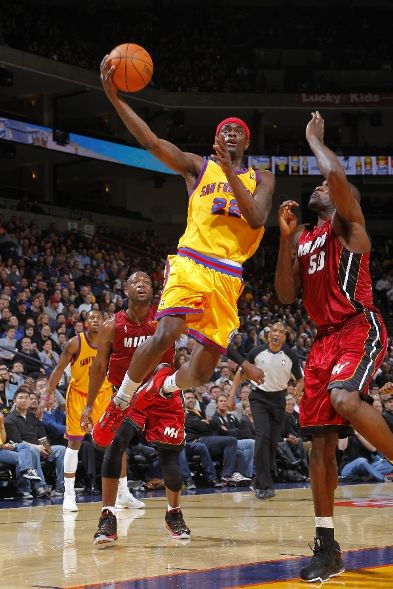