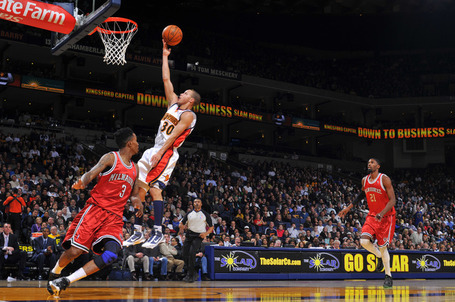 Who can't guard who?

Is this a basketball season, or Custer's last stand? The Warriors began this game dressing the NBA league minimum 8 players. After Anthony Morrow injured his knee two minutes in, there were 7. Then Cartier Martin got his eye raked by Andrew Bogut, and the Warriors were down to 6. Martin eventually returned, but by that time the Warriors were in serious foul trouble. Chris Hunter fouled out, Andris Biedrins fouled out, Stephen Curry fouled out. And the Warriors were down to 4. FOUR PLAYERS? When Curry fouled out, the refs were forced to invoke the little-known NBA Rule No. 3 (Section 1A), which basically states that the last player to foul out stays on the court and continues to play, but if he fouls again the other team receives a technical free throw in addition to the usual free throws. Joey Crawford mentioned to the broadcasters that he'd never seen this happen before in his 33 years as a ref.

What was amazing about this game was that it was such a good game. The undermanned and undersized Warriors fought and clawed all game long, and were down only three with :36 seconds left when the Bucks bricked a three, and the Warriors had a chance to rebound and go for the tie. Unfortunately, the ball bounced the Bucks way, and Brandon Jennings came right back with the game sealing three.

Despite the loss, I marveled at this Warriors performance. There is simply no quit in this team. Led by the determined and incredible play of Monta Ellis and Corey Maggette, the Warriors have refused to let adversity affect their effort on the court. Tonight they also got great efforts from Andris Biedrins, who played his best game of the season, and Stephen Curry, who did a fantastic job chasing Brandon Jennings and Luke Ridnour for the full 48 minutes.

No quit. As a fan, I truly appreciate what I am seeing from this Warriors team. I think the players deserve a ton of credit. And maybe Don Nelson and his coaching staff deserve a tiny bit of credit, too.

Let's talk players. (This is going to be a short list!) 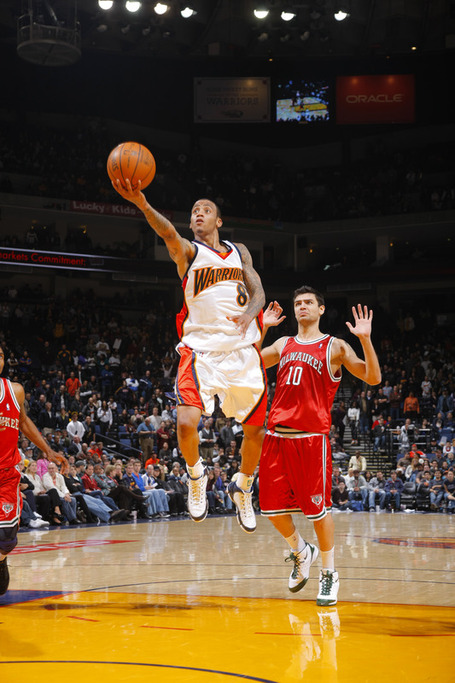 Monta Ellis: After his mental melt-down against the Cavs, Monta Ellis has transformed himself in the last two games. He has done a simply beautiful job at running the high pick and roll, and also driving and dishing. His pick and roll with Corey Maggette with 1:00 left was a thing of beauty, executed at crunch time. 8 assists in this game, in addition to his expected 33 points. Monta has come a long way as a player in a very short time this season. In the beginning of the season I had my doubts about whether he was even still a star. Now I think he's verging on superstardom.

Monta had a couple of his drives snuffed in crunch time, by Luc Mbah-Moute. I don't fault Monta for these plays. Both times, he made great moves, and appeared to be home free. But both times, MBam made an incredible recovery to cap Monta at the rim. I think these plays are a testament to the next great defensive player in this league. That Scott Skiles even thought he could use MBam, at 6-8 230 lbs., to guard Monta is a testament to his ability. He is an astounding player, and he showed it at the end of the game. Hats off.

If I have a quibble with Monta it is over his free throw shooting. He was 4-8 last game, 2-5 in this game. He's shooting 77% from the line, and should be able to do better. Perhaps he should spend more time practicing free throws, and less on trick shots? (Man, what an old curmudgeon I'm becoming.) 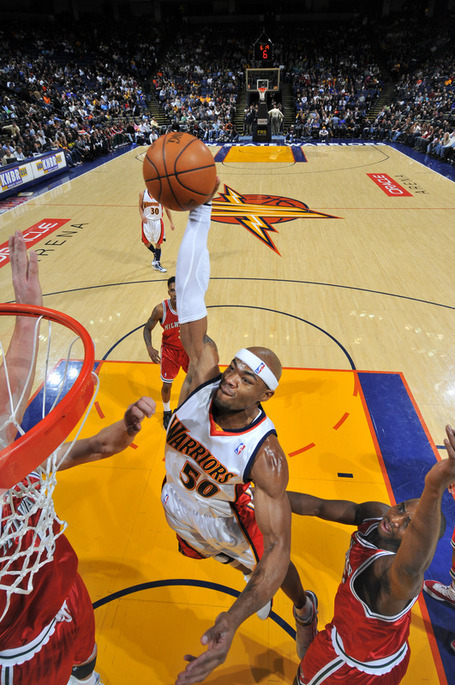 Corey Maggette: Had another incredible performance that we've begun to take for granted. 32 points on 10-14 shooting. 12-13 from the line. 9 rebounds, 6 assists. While guarding power forwards. For 42 minutes. On a banged up knee.

Maggette came into this game shooting 60% over his last 15 games. Now its 16.

Stephen Curry: Its not reflected in the box score, but I think Curry played one of his best games of the season. The job he did on Brandon Jennings defensively in the first half was eye-opening. Curry was able to move his feet and stay in front of Jennings, to the shock I think of many. He forced Jennings into 7 turnovers, picking up 6 steals. And he forced him into bad shots.

Jennings came on strong in the second half, largely I think because Curry became exhausted having to play all 48 minutes. And also because Curry and the Warriors big men had to guard against foul trouble.

When Jennings hit his game-sealing three over Curry, it was because Curry had to give help on Bogut on the pick and roll. But I'll give Jennings credit: he likes the big shot, and he makes them.

Still, I think this game showed we got the better rookie.

Andris Biedrins: For the first time this season, Biedrins looked like the player I remember. Great help defense, great effort on the boards. Bogut won the matchup, but Biedrins played him tough. And the steal and great tap-ahead to Monta that Biedrins made in the fourth quarter was one of the highlights of the game. Welcome back, Beans.

The "Bench:" Cartier Martin did a decent job defensively in this game, guarding bigger players. His 8 rebounds were big. His offense is a little rough around the edges, but he will be an important piece for this Warriors team this year, even when (if?) they get some players back. I expect the Warriors to sign him.

Chris Hunter was a foul machine. But several of his fouls were invisible to me. Go back and take a look at the play that caused Morrow's injury. Bogut drove straight into the chest of a planted Corey Maggette, who was knocked back into Morrow's knee. Incredibly, no foul was called. No charge, no block. It is mind-boggling to me that the refs swallowed their whistles on that play, and called every touch foul on Chris Hunter. Another example of the friendly whistle the Warriors get at home.

Devean George was again forced into action. He still has nice defensive instincts, picking up 2 steals, but doesn't seem to have his old athleticism.

Do I have to choose? Monta Ellis and Corey Maggette have put this team on their back.