My esteemed colleague Fantasy Junkie started The Andris Biedrins Made Free Throw Watch, tracking whether Biedrins could go the entire season without a made free throw. I was looking over the numbers this morning and it seems like a good time to complement that with The Andris Biedrins Starting Center Matchup Watch.
Jump for watchage!

The Warriors are nearly at the half way mark this season with 38 games now in the books and a lowly 11 wins. Biedrins has only played in 13 of those games. After last season's Troy-Murphy-without-a-jump-shot campaign of double-doubles, the Warriors 9 million dollar center and supposed franchise saving center that so many homers couldn't wait to destroy WE BELIEVE to build around, has put up a weak 5.1 ppg, 6.5 rpg and a whopping 6.5 fouls per 36 minutes. I'm sure you could extrapolate his numbers to per 36 numbers and say he's still rebounding just fine, but guess what? That's doesn't matter. Per 36 numbers aren't a meaningful way to standardize performance when you're racking up that many fouls. There's no way he could ever attain those numbers with his current foul rate- it's against the rules of basketball.

But there's a bigger issue at hand here. Andris Biedrins has been abused by the opposing starting center EVERY SINGLE GAME this season. For a supposed top 5, top 7, top 10, top whatever center- that's a joke. Again, I don't care what the comparative per 36 numbers might say given that alarming foul rate. I also don't even care if Biedrins wasn't the actual Warriors starting center on a given night. That's his role and the role he signed up for when he inked that extension. Sure he's had injuries (like every other Warrior), but again if you're not ready to play, then don't play.

I won't waste words to describe how awful of a season the Warriors "franchise center" is having. That would just result in hysteria in the comments plus a ton of hate mail from the Biedrins fanboys. So I'll just give you the final stat lines and let you be the judge:

Winner: Spencer Hawes (This one's actually pretty close and you could make a good case for Biedrins, but what fun what that be? Let's keep the streak alive!)

I don't know about you all, but I've got my calendars marked for Sunday January 31st. Warriors vs Thunder in Oklahoma City. Andris Biedrins vs. Nenad Krstic. 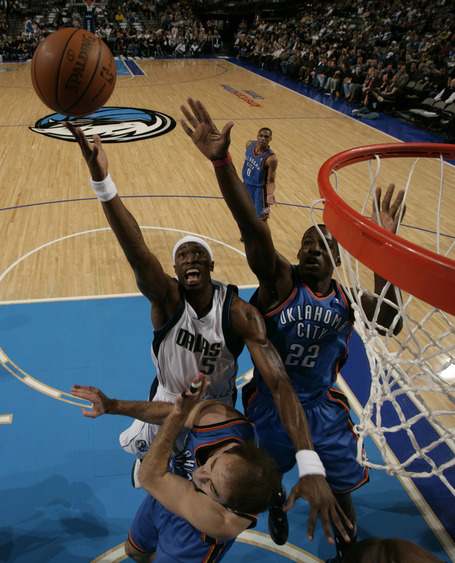 Swap out Josh Howard with Andris Biedrins in the above photo on January 31st?