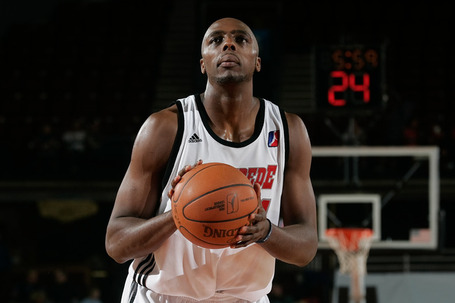 Just got done texting Atma Brother ONE on how to report this breaking, below-the-radar-ish GSW news, especially when we hear it from our fellow blogosphere and no one in GSoM has yet FanShot it. The way this one came up was pretty cool...

So I tell Atma, "Hey this GSoM story's just gonna be a straight link to RU, since I don't really know much about Tolliver and I bet the GSoM community isn't gonna care too much about another random NBDL call-up."

Then it hits me. Tolliver's being called up from the Idaho Stampede and I happen to know assistant coach Joel Abelson, who is from the Bay Area.

Guess what, one text later, we have AN EXCLUSIVE SCOOP on Anthony Tolliver! Here's what Abelson had to say:

He's the most NBA-ready player I've seen in 3 years in the D-League. Not only can he contribute on the basketball court, but he's an insanely hard worker and a tremendous human off the court. All he needs is an opportunity to play and he will be an NBA rotation player for the rest of his career.

Now, perhaps the best story of the NBA this year was Sundiata Gaines hitting that buzzer-beater for the Utah Jazz the other night after also being called up from the Stampede.

So of course I had to ask Abelson the obvious follow-up question: "Wait, then you're saying Tolliver's more NBA-ready than Yatta Gaines, right?"

100 percent. Yatta is a gamer with NBA-caliber skills and can develop into a very good NBA player. But today, A.T. is the most NBA-ready player in our league. After bouncing around for 3 years, he now understands what he has to do to be effective every night.

Since I love following the history of the NBA Draft and NBA Summer League, below are Tolliver's college stats, which aren't really that eye-popping. He played for the Creighton Bluejays and went undrafted in 2007. According to Wikipedia, he played two games for the Portland Trail Blazers this past December.

I tried to add an SBNation widget for Tolliver's stats from Portland, but it came up blank. His NBA stats were pretty barren on Portland's deep roster.