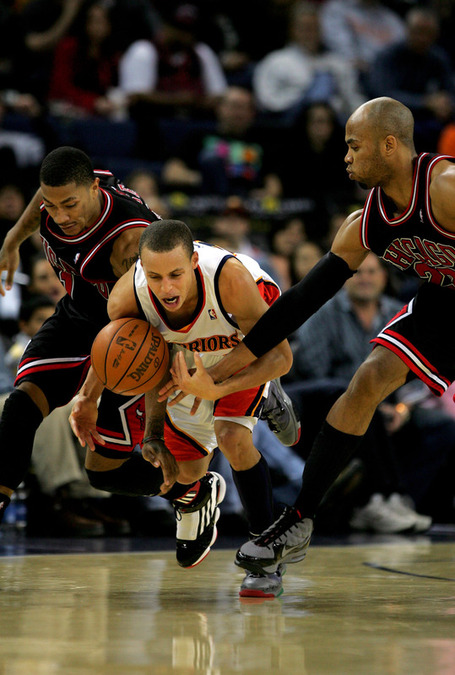 In Don Nelson's words, the Warriors joined battle with the Bulls in this game with "seven and a half" players. The half being Devean George, who is still limited in his return from injury. Three of the seven remaining players are D-league rookies. But the Warriors got solid contributions from their D-leaguers, and huge games from Monta Ellis, Corey Maggette, Stephen Curry and Andris Biedrins, that allowed them to steal this win against the red-hot Bulls. This win was all the sweeter for coming on Martin Luther King day, in front of thousands of screaming young fans who got the day off from school in honor of one of the greatest of all Americans. Your faithful reporter joined his fellow GSoMers and the kids and chaperones of Dream League, El Camino YMCA Warriors, Oakland Unity High School and St. Joseph Fremont Lifeteen Youth Group in Section 211 of the Oracle for the second GSoM Kids Day. What a great day to watch another inspiring effort from the short-handed Warriors, that this time ended in a satisfying win.

Despite the final score, the game was more than usually suspenseful until late in the fourth quarter. Stephen Curry picked up 3 fouls in the first quarter. Maggette and Biedrins quickly joined him in foul trouble. Everyone could sense a repeat of the last game against the Bucks, when the Warriors were reduced to four players and required the invocation of Rule 3(1a) for the first time in NBA history. But aided by the terrific defensive play of two of their recent D-league callups, Cartier Martin and Anthony Tolliver, the Warriors were somehow able to weather the foul trouble storm, and go into the break up a point at 54-53.

In the third quarter, everyone could sense fatigue beginning to set in. This has been a bit of a theme for the short-handed Warriors. The Bulls took a three point lead with 2:21 left in the quarter. But spearheaded by some great team defense and two big Stephen Curry shots, the Warriors went on a 9-2 run to seize a four point advantage to end the quarter. And the Warriors never looked back, breaking the game open mid-way through the fourth.

Lets take a look at the individual performances: 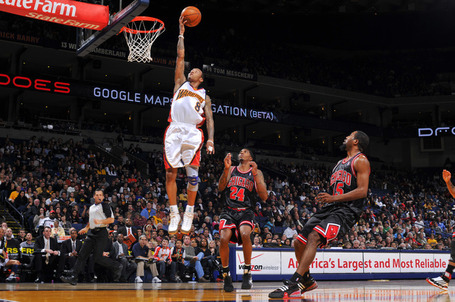 10 from the Russian judge.

Monta Ellis: Monta looked fatigued at points in this game. He couldn't buy a mid-range jumper. But he didn't let it stop him from attacking the rim again and again. And he distributed the ball beautifully for the third straight game, getting 8 assists against 2 turnovers. You might want to quibble with his 39 shots to make 36 points (Nellie joked post-game that he didn't know if any Warrior since Wilt had ever taken that many shots). But that's what it would be, a quibble. He again put the team on his back with a huge effort on both ends of the court for 48 minutes. 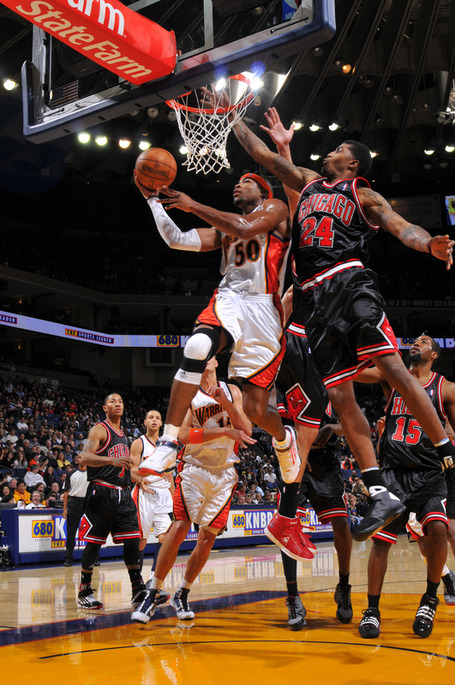 Corey Maggette: Maggette turned in another routine effort. By routine, I mean his 17th straight game scoring over 25 points and shooting over 60%. 32 points on 14 shots routine. While guarding Luol Deng, who was held to 7-16, mostly from the perimiter, and Taj Gibson (3-7). And he picked up a routine 6 rebounds and 5 assists as well.

This is the kind of praise I have heard Maggette get from the media recently: "Corey Maggette's not the problem." And "You have to give Corey Maggette credit." As if the commentator had his arm being twisted behind his back.

I don't get it. This is the kind of praise I give Corey Maggette: Name 5 small-forwards in the NBA who are playing better than he is. 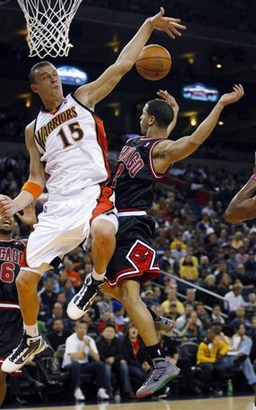 I block that stuff with my eyes closed.

Andris Biedrins: Does Beans read GSoM? In his first game since Atma Brother One called him out, Beans put together a monster performance, and dominated his matchup against the second-leading rebounder in the NBA, Joakim Noah. 19 boards and 8 blocks. Beans was huge in the paint in this game, anchoring the Warriors' formidable defensive effort. The Bulls shot 37% for the game, and the greatest credit for that goes to Biedrins. Welcome back, Beans.

A nice sidelight occurred in this game, when Biedrins finally made his first free throw of the season. The whole Oracle crowd got behind him as he was shooting each attempt, and took the roof off when actually managed to put one in. A new Oracle tradition being born? We better hope not.

Of course, Biedrins finished a mere 1-7 from the line, and was so demoralized that he requested that Nelson protect him from being embarrassed by the Hack-a-Beans. As Nelson admitted after the game, this led to Nelson getting faked out in the third quarter, when he removed Biedrins immediately after he was intentionally fouled, until he realized that the Bulls were nowhere close to being in the penalty. Biedrins went right back in on the next possession.

Nellie also joked post-game that "I keep threatening to bring Rick Barry back." This shouldn't be a joke at this point. Biedrins needs to go to the underhand shot. C'mon Beans, don't be afraid to look like a girl. Man up!

Stephen Curry: A monster performance from the Warriors rookie going head to head against last year's rookie of the year. We're getting used to the phenomenal efficiency: 9-18 shooting, including 5-8 from three. We've seen the phenomenal court vision, and amazing passing ability: great looks on the fast break, a beautiful lock and lob to Maggette, and a called alley-oop inbounds play to Monta over the backboard from the left corner behind the end line, that would have brought the house down if Monta had managed to finish it. We're getting used to his uncanny knack for rebounding among the trees: 10 in this game.

But how about his defense on Derrick Rose? Curry guarded Rose most of the game, and forced him into 7-19. In the fourth quarter in particular, Curry's defense on Rose helped break this game open. Twice he forced Rose into difficult fading shots, secured the rebound himself, and ignited the fast break. On another Rose drive, Curry blocked his shot, leading to another fast break. And at 4:08 of the fourth, Curry turned Rose over, and hit the game-sealing three at 3:51.

This is what Don Nelson had to say about Stephen Curry post-game: After a lot of hard work, Curry has turned into "a pretty darn good defensive point guard." Curry has "the total package. He's quite a point guard." "I don't know that any rookie point guard is better than him."

This is not insignificant praise from the coach who developed Moncrief, Hardaway and Nash.

The D-League All-Stars: Chris Hunter was unfortunately invisible in this game. He didn't manage a rebound, and Jim Barnett called him out for his failure to finish a pick and roll.

Fortunately, the Warriors got incredible efforts from their newest additions, Cartier Martin and Anthony Tolliver. Not on the offensive end, of course, where they were a jittery 4-18. Martin did hit a big three in crunch time, though, and Tolliver made a nice finish inside on a Monta Ellis feed.

Martin and Tolliver were huge on defense, though, and in particular on the boards. They combined for 17 rebounds against the Bulls big front line. Both of these guys have big NBA-ready bodies, and know how to use them in blocking out. Nellie mentioned post-game that their efforts are what allowed Biedrins to be so effective.

Martin in particular seems to be a great defender. He has a nose for the loose ball. And he played terrific defense on Deng in the fourth.

Of course, the game wouldn't be complete without a Warriors injury. Tolliver went out of the game in the fourth quarter with a gimpy knee after Brad Miller fell on him.

And then there were 6. And a half.

Maggette had another monster game. But this one goes to the kid. Stephen Curry.