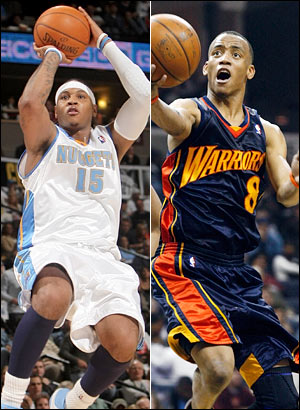 The last time these two teams met, it was a back and forth high scoring affair that saw the Warriors lose a close game with some controversial plays happen right at the end of the game. Remember this? Did you read the recap from the SB Nation Denver blog?

It was a crazy ending to a crazy offensive game. The foul on Smith was indeed a foul on Ellis, but we've all seen plays like that at the end of games result in no calls. Denver was fortunate to get get a whistle and Smith did what he needed and secured the win. You play the game the refs call and Denver, not luckily (correctly, but sometimes not called), finished the game.

Ummm, it's not a foul if you don't make contact right? Anyways, I'm still a little bitter. But this is an even better Warriors team now. This is a team with 3 D-Leaguers! Can't beat that. Ask the Bulls. In all seriousness, it was great to watch the 3 D-Leaguers on Monday. They were scrappy and played all out, something you don't always see in the NBA.

So what about those Nuggets?

Well, the last time these two teams met, the Nuggets were without their two stars, Carmelo Anthony and Chauncey Billups. Those two will be playing this time around.

Curry vs Billups
It'll be interesting to see how Steph Curry plays against Billups. He did a very nice job defensively against Derrick Rose the last game. He also rebounded, passed, and shot the ball well. Billups is much better and savvier than Rose, so Curry's going to have his hands full.

Monta vs himself
Well he can't be taking 39 shots this game like he did in the last. That's just way too many to only score 36 points. He'll have to figure out how to score more efficiently if the Warriors are going to have any chance.

Maggette vs Melo
Corey Maggette is playing excellent right now. He's getting to the line about 155 times per game and he's shooting the ball very well from the field. I commend him for his turnaround. With Maggette on the team, I feel like I can't complain anymore about bad calls on the Warriors that send the other team to the line. There are so many calls that Maggette gets that I scratch my head and laugh because I don't understand where the foul was. But it doesn't matter, he just somehow finds a way to get to the line. If Maggette is playing well, Melo is playing phenomenal. Look out.

Andris Biedrins vs Rick Barry
Andris, I know you tried already, but please take free throw lessons from Rick Barry. It can only help you. There are 1st graders who shoot it with their opposite hand that can shoot better than 7%. Blind people shoot better than 7%. You talk about going back to what you did last year - guess what, 58% is horrible. Aside from that, welcome back. Just an amazing game against the Bulls - glad I was there to watch it.